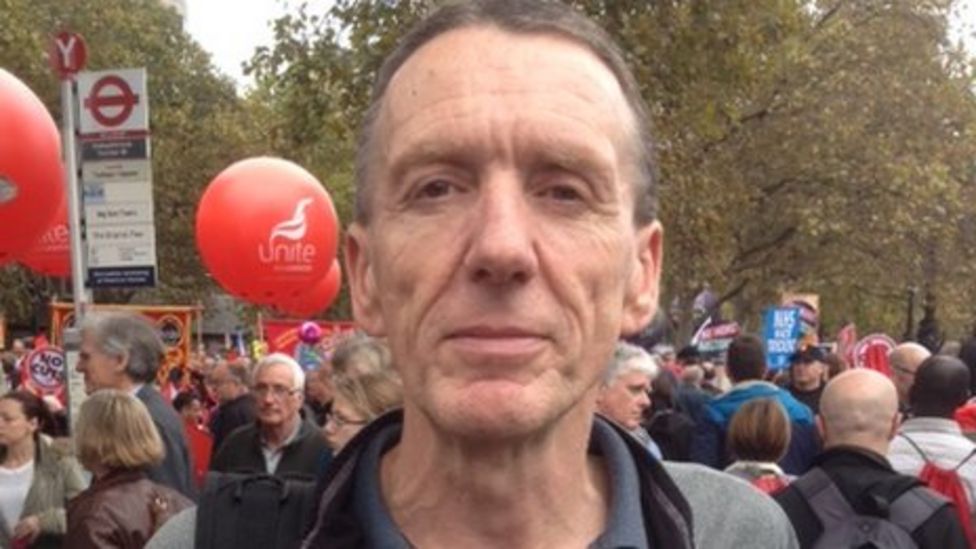 Photo: Mick Bowman with Unison at an anti-austerity rally in London, 2014

Anti-fascism, in theory is common sense and morally just work. Who can argue against that? Racism and hatred should also be opposed wherever it emerges. However, when the name and justification of Anti-fascism becomes a vehicle for smearing and attacking others, solely for the premise of party politics, it becomes problematic and deviates from sincere intentions.

And such is what the so-called “Tyne and Wear Anti-Fascist Association” (TWAFA) is now implicated in. Linked to the Unison trade Union, and formerly funded by Sunderland City Council, which it is linked to via committee, Sunderland Global Media today is exposing a serial twitter troll who under a false pseudo identity, has engaged in a sporadic politically motivated history of harassment, bullying and smear tactics in the name of Anti-fascism spanning 13 years; going far beyond its portfolio to attack anyone who has opposed the Labour Party with an obsessive focus on Sunderland.

If you’re familiar with North East of England twitter, the name “Mike Hartman” might ring a bell. Mike quite openly on his twitter account claims to be the spokesperson for TWAFA and sports photos of the River Tyne on his Facebook, claiming to be based in Gateshead. However, Mike Hartman is a false identity and no record of such a person exists beyond social media. Because it is in fact, a pseudonym for Mick Bowman, an official in the very local same trade union who has a coincidentally similar sounding name.

Mick Bowman’s full time job is described by the BBC as a “social worker for Northumberland County Council” who lives in Newcastle. But how of course, do we prove that is him? That same Mick Bowman openly professes in a UNISON area report that he is in fact the chair of the TWAFA, as he quotes here: “I act as a link between the branch and anti-racism/anti-fascism organisations such as TWAFA (Tyne and Wear Anti-Fascist Association), of which I am the chair“.

So now, Mike Hartman and Mick Bowman happen to exist within the exact same trade union and the exact same TWAFA fascist group and claim to represent it simultaneously, except there is no evidence of the former existing outside of twitter in any capacity. In 2019, a freedom of information request was lodged with Newcastle City Council asking this exact question about both names, but they refused to give a direct answer about it. Bowman has also signed open letters on anti-racism on behalf of TWAFA, and there are no such signatures from “Mike Hartman”, simply put because he doesn’t exist.

Bowman at some point also served on Newcastle City Council under the Labour Party, where he led the city’s policies on mental health. In 2018, he was defeated in the Fawdon ward by the Liberal Democrats. He was also described on one website as an “advisor to the Mayor of Newcastle” and an “anti-racism campaigner”.

For the purposes of balance, it should be acknowledged that Bowman posts a lot of “fair game” material related to convicted racists and hate crimes in the area. That is in his legitimate portfolio and if a specific news article has been published on a court sentencing, it is ultimately a matter of record.

But not all of his work consists of that. Despite that TWAFA professes only to counter extremist groups and far-right organizations, Bowman has gone far, far beyond that and has used his position behind that fake identity to run a 13 year long smear campaign in the bid to specifically target people who have opposed the Labour Party purely out of political preference, and has an unusual concentration on Sunderland Politics which far exceeds the goals of “Anti-fascism”.

In order to make it appear legitimate, such usually involves seeking to smear various individuals and groups as “far-right”, “extreme” or “racist”. This is of course not surprising given up until 2017, Sunderland Council gave many grants to his organization, and controversial councillor Michael Essel was also a part of its committee. That alone speaks volumes about the manner of this account’s conduct online. Some individuals we spoken to believe that the account is managed by more than one person beyond the obvious authority of Bowman, but this is yet to be proven.

In doing so, a search of Bowman’s tweets related to Sunderland reveals a highly aggressive focus on a former anti-council group known as “Sunderland for Transparency“, as well as repeated attacks on other council critics such as Len Lowther, none of which have anything to do with anti-racism. When Len Lowther was falsely accused of harassment, Bowman’s account pushed the story repeatedly and aggressively. If it were an individual professing a personal opinion, it would be permissible. However, what makes this most controversial is that again this organization is a) council linked b) has been taxpayer funded and c) is linked to pushing clear partisan goals.

Bowman, when asked for comment, in an email denied that the account is him, and insisted “he is not responsible for its content“. However, from the evidence above there are more questions at hand: