Goya: The Untold Story of the Sunderland Legend 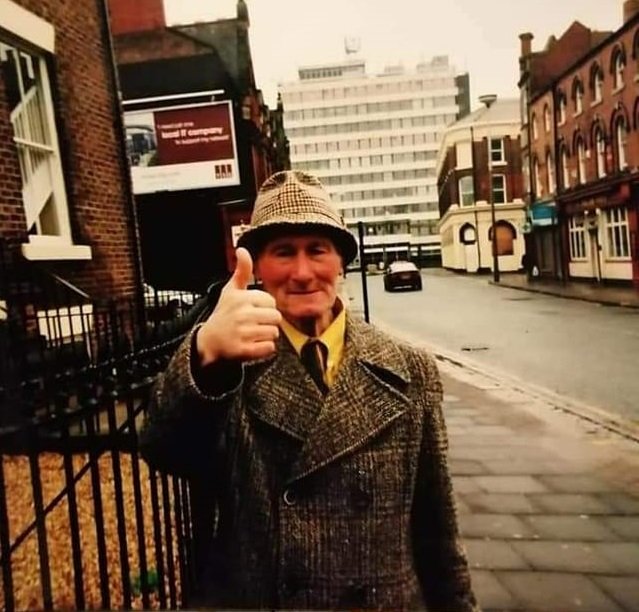 A month ago we done a brief overview on the “characters” of Sunderland, the eccentric and notable figures of wearside who either amuse, uplift or even scare us! Now, we’re moving into a series which covers these people with deeper biographical depth and journalistic insight, aiming to discover and understand the lives they’ve led. Following our piece on “Jimmy Jesus”, we’re now happy to move onto “Goya” or otherwise known as Gordon Simpson, a local legend who passed away in early 2018! This is what we found!

Gordon Simpson was born in the last quarter of 1939, although we could not find a specific record on him, but would assume this was of course in the area. For most of his life, Goya worked in coal related jobs. He is described as having manned “Sammy Bucks Coal Wagon on Hylton Lane” and at some point in his life settled in Thorney Close. Gordon got married at quite a late age, with records showing he got married in the year 1982 at 43 years old, to a woman named Gillian.

The origins of his wife remain a mystery, as nobody in Sunderland or nearby was born with that maiden name. The only person in Britain with such a name was born in East Ham, Essex in 1960. What happened to Gordon and Gillian’s marriage remains unclear, but evidence suggests it did not last not least owing perhaps to the highly “individualistic” so put it mildly, of Goya’s life. We note that his obituary upon his death did not describe him as a “husband” or mention his former wife, but only as a dad, granddad and great granddad. Needless to say, his family loved him resoundingly. He would live most of his life on Thorney Close, and at least as early as the 1970s, the estate where he would make his name brand.

For those who known him on Thorney Close, Goya enjoyed wearing platform shoes and flares in the 1970s and 80s. He would reportedly go around the estate and close every single persons gate, giving an impression of extreme consideration of other people. This coincides with claims that he frequently cleaned his hat and boots. Goya embraced fashion, liked to keep clean and dressed well. In his latter years, he became known likewise for his signature hat.

He was known up until the day he died for an extremely proactive way of living which would see him walk effortlessly and at a fast pace all over Sunderland, especially so after he retired. Age never held him back and his death via a heart attack just didn’t do him justice. He is described as being “up early at 5.30am”. Common areas to spot him on his walk included Thorney Close Road and Bede Bank. On his walks, this was met with his signature phrase “Garn t’ Seaburn!”. He was seen so noticeably and so frequently that everyone in Sunderland grew acquainted with him in some ways.

His personality was also highly “Humorous” to say the least and of course massively outgoing. There is a certain video on youtube of him and we won’t link it because it wouldn’t be appropriate, but that readily sums him up. Goya also liked to talk about SAFC and make his own predictions in an often “unreliable” way. Stories of him in this area include him claiming that Sunderland had “signed Mandela” for £2 million… and once claiming the club was on the verge of many other signings too, as one person who encountered him in Park Lane stated.

Goya unfortunately left this world on the 21st January, 2018. He sadly suffered a heart and later died at Sunderland Royal Hospital. What was one of his typical walks and adventures throughout town ultimately and sadly proved to be his last. He bore no illness, he never stopped and never slowed down. Our verdict on Goya is unlike Jimmy Jesus, he was not a character who’s life was a tragedy or needed help or pity, but a man who ultimately embodied a great local spirit and was an icon of appreciation. Goya was refreshing honest, funny, pro-active and eccentric, and that’s where his story ends.

2 thoughts on “Goya: The Untold Story of the Sunderland Legend”