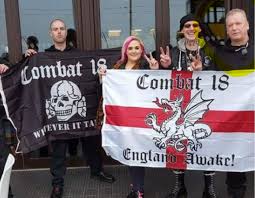 The far-right convicted racist Billy Charlton who once spoke alongside EDL founder Tommy Robinson has been convicted of distributing an indecent image of a child. Charlton was jailed in 2019 for stirring up racial hatred and now finds himself back behind bars. Here, SGM takes a look at Billy Charlton’s history of racism.

In early 1992, the far-right British National Party (BNP) formed Combat 18 as a stewarding group whose purpose was to protect its events from anti-fascists. C18 in its name is derived from the initials of the Nazi German leader Adolf Hitler: A and H are the first and eighth letters of the Latin alphabet.

Billy Charlton was associated with Combat 18, who’s logo derives from the Totenkampf used by 3rd Panzer Division of the Waffen SS. The group has been implicated in the deaths of immigrants and non-whites.

In 2019, Charlton was jailed for 21 months over a series of racist public protests. He organized a series of rallies in Sunderland in 2016 and 2017 speaking alongside Tommy Robinson at one of them, which was linked to an attack on two Asian men, vandalism and other hate crimes in the area. Months prior, Charlton had appeared on the front page of The Sun and in media coverage around the world after being photographed celebrating the Brexit referendum result.

Sentenced to 21 months behind bars for five counts of inciting racial hatred in speeches between November 2016 and July 2017 after telling a crowd of protesters in Sunderland “this is our town, it belongs to us. These people turn up and are raping our children and we need to hold somebody responsible for it.”

In a particularly racist comment following David Cameron’s pledge to resettle 20,000 Syrian refugees, Charlton stated that the former prime minister allowed “20,000 rapists” into Britain and shouted: “We don’t care about them. Get them off our kids, get them off our streets and get them off our island.”

EDL Tommy Robinson praised Charlton: “I wouldn’t have heard of this campaign if it wasn’t for Billy. The battle has to be fought through every avenue.” Charlton claimed in another speech in Sunderland in 2017 that there was an “epidemic” of sexual abuse by migrants in Sunderland: “Immigrants are drugging our women, kidnapping, beating and raping them.”This was part of a rally named “Justice for Chelsea” in which a 26-year-old woman claimed she was raped at an address in Hendon, following a night out in the city centre in September 2016.

The allegations led to six men who were believed to have been of Middle Eastern origin being arrested. However, following inquiries which included examination of CCTV, extensive forensic examination and witness statements, they were told no further action would be taken. Chief Superintendent Ged Noble of Northumbria Police said at the time that the evidence presented did not substantiate the claims that were made and all legal avenues had been exhausted.

Judge Edward Bindloss told Charlton at the time of his sentencing in 2019: “You have been revealed as an intelligent, articulate, skilled public speaker. But also, a manipulative bully in my judgement. “You propelled the [the justice campaign over the alleged rape] with rhetoric and misrepresentations and the jury have found an agenda of racist hatred.”Judge Bindloss said Charlton’s criticism of the police would deter victims from coming forward because he knew the police had thoroughly investigated the woman’s claims. This reduced the publics confidence.

Charlton has now been jailed for three years for distributing an indecent image of a young boy aged between 10 and 14 and an animal to 47 contacts on WhatsApp in the summer of 2018. The court heard that it is not suggested that he is a paedophile, but rather he has a “sick sense of humour.”

He admitted the image was indecent and that he forwarded it but claimed that he had not seen it and did not believe that it was indecent. A jury found him guilty of distributing an indecent image of a child and he had previously admitted to possessing extreme pornography involving an animal and an act likely to result in serious injury. Charlton has also been ordered to sign the sex offenders register for life.