Legends of Sunderland: The Bag Man. Who was he? And what happened to him? 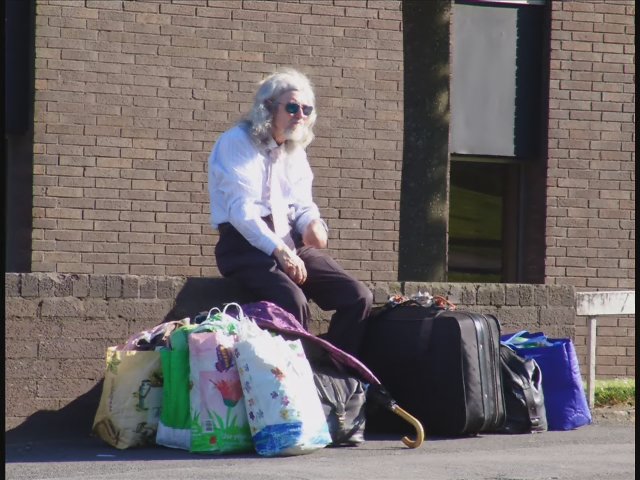 For previous installments in this series, see our articles on: The Spectre, Gordon Bucket, Nana Iris, Goya, Jimmy Jesus and Peggy Pots.

This man was an icon of Sunderland City for most of the last decade, until he suddenly disappeared. The image of a bearded fellow with long hair with a cohort of suitcases who would appear at various points of the city was of course unmissable, most usually outside the train station. Was he homeless? was he in despair? Who was he? And what happened to him? Here we bring you the story of “Ernest Rolls” or better known as “The Sunderland Bag Man” as the latest in our investigations and reporting into the area’s most peculiar figures.

The Bagman’s early days is largely unknown. At some point he is mentioned to have worked at the Galvanizers for most of his life, and is also claimed to have “worked down pallion shipyard”. Some had popularly claimed that he was a University Lecturer, but this appears to be false as the same story is also commonly attributed to Jimmy Jesus. Prior to his predicament, the Bagman was living in Johnson Court until the complex was ear marked for demolition, rendering him without an abode. Furious at his eviction, the Bagman’s life on the streets began as one of protest against his situation and a demand the council rehouse him, with seemingly nobody else to support him. He was left carrying around all his life positions which were in his famous suitcases. He was not however, out of pocket or in a state of mental breakdown.

In this unpleasant situation, witnesses describe the bag man as attempting to life as normal a life as possible. It is assumed that having no home, he slept on the streets. Not quite, it is alleged instead he slept in the boiler room of Sunderland University on an agreement with security, somewhere of course that was warm and secure, on the condition he was out by 6am every morning. He probably had a pillow and blanket within the cases. Waking up early, the bag man would cart his possessions to the public toilets in the Bridges. Here he would clean himself up and get changed. This is a thing to remember about the bagman, his situation did not render him dirty or unclean. He maintained a very smart appearance.

After cleaning up and getting ready, the next act in Bag Man’s routine would typically be to travel to outside of the Train Station. In this area he would buy himself breakfast from Milligan’s or other nearby bakers, as well as a newspaper to go with it. Apparently he also frequented the betting shops there on Athenaeum Street, reminding us that he was not short of cash. Typically by the end of the day he’d move himself back towards the University where he spent the night, and for a number of years this was his life, yet there was no indication like homeless people had that he had “gave up” on everything and was fighting for survival.

In 2011, some local bystanders defended Ernest from being attacked, his situation often provoked unwarranted abuse, curiousity and attention. This is of course unfair for his personality, the Bag Man didn’t in fact bother anybody, his personality was in fact reserved and not very talkative. He never made a scene or disruption anywhere he went. He was by no means an attention seeker.

Of course the question you’re all waiting for is what happened to him? Well, the “Bag Man” isn’t dead, but nor is he a bagman anymore either. In the mid 2010s at some point, Bag Man finally resolved his dispute with the housing association and they granted him a new flat in one of the tower blocks in the city centre, either Astral or Solar House. From there, he continues to do live his life and do his regular thing. He still may be seen around the city centre, smartly dressed as always, but just without the circus of attention that came with his suitcases. Fair play to him, a happy ending of which Ernest finally won, and showed some guts in what he endured in the process.

5 thoughts on “Legends of Sunderland: The Bag Man. Who was he? And what happened to him?”