Little Nana Iris: The Untold Story of a local legend who embodied the Sunderland Spirit 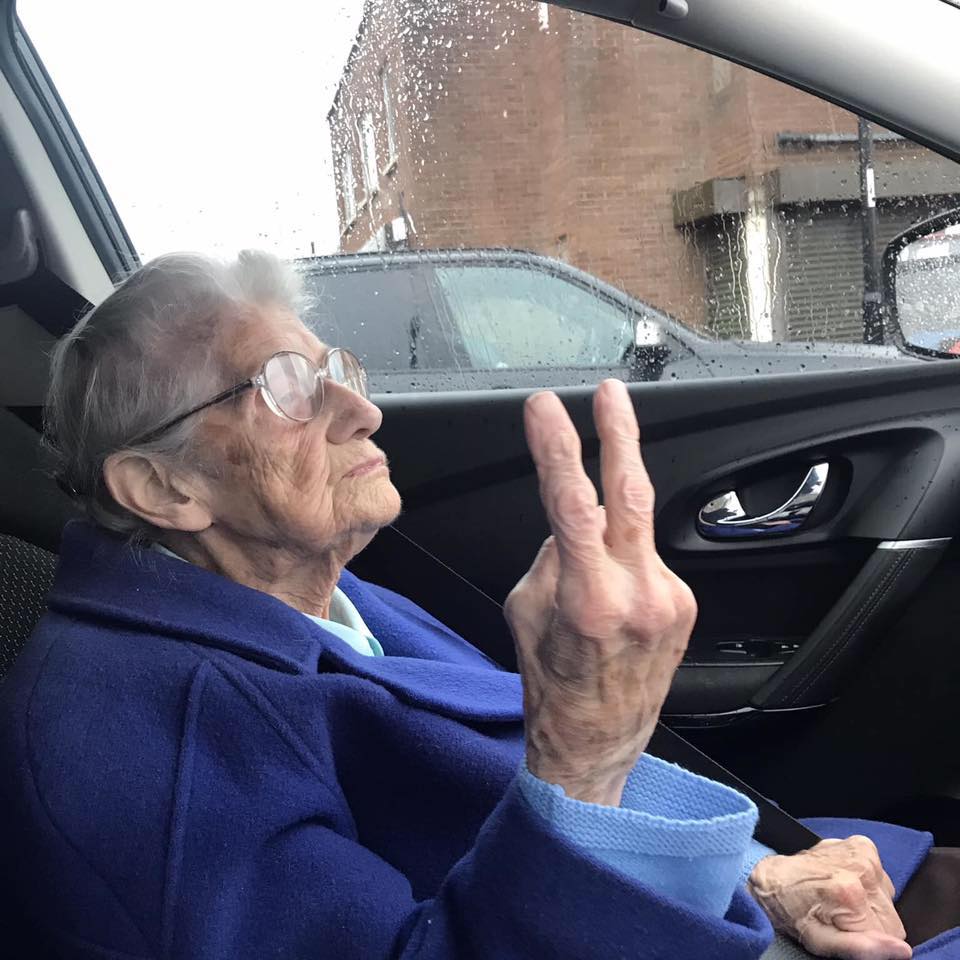 “I’ve got three cats, I dinnit knar who’s they are but as soon as I open the winda they sharp f*** off”

In our recent articles we’ve been covering the “characters” of Sunderland and their lives. First Jimmy Jesus, then Goya, we’re now happy to bring to you the story of another local sensation, the city’s unlikely social media star, “Nana Iris” or otherwise known as Iris Amos, who sadly left this world behind at the beginning of last year. But who exactly is she? Why was she such a hit? And what does her legacy tell us about life in Sunderland and old times? Here we bring you it all!

Whilst many characters of Sunderland have often been known for being unique and eccentric in their own ways, making them stand out, in ways which either surprise, scare or intrigue us, the online fame and fandom of Nana Iris was a bit different. As a straight-talking, blunt and rough around the edges grandmother, fiercely independent, she was not unique or a local “eccentric”, but nonetheless became famous online because she embodied the spirit and characteristics of a generation that is rapidly disappearing, of which many of us relate to our own grandparents and beyond, representing a way of life that was very different.

Iris Spencer was born in April 29th, 1927 in Penshaw. At some point in her youth the family moved to the Old East End of Sunderland, where she would spend the entirety of her life. In these days, the East End was where everything was and almost all ordinary people lived. There were many slums and life of course was rough and tough, the primary focus of families back then was to survive and get by. This is the world she grew up in, and it reflected in her very hardy, blunt and no-frills attitude towards life. Anyone who knows people from that era will account similar experiences.

It was a world of course where Iris had to learn to grow up quickly, not least because of the Great Depression and soon after, World War II. There was little time for education. Whilst she was only a teenager, Iris frequently recounts in her videos that she served as an Air Raid Warden. She would go out to make sure the Blackout was tightly enforced at night, and berate anyone who wasn’t following the rules, a role which quite obviously suited her personality and you can only imagine the experience of those who didn’t!

After the war ended, Iris got married to a Royal Navy Sailor called James Spencer in 1947, she was 20 years of age. However, it was a marriage that would be tragically short-lived. He may have survived the war, but he did not survive a submarine he was assigned to and died in an accident at just 25 years old. Nana Iris was widowed and left with a young daughter, Valerie. This could have only contributed to her tough attitude to life which forced her to work hard. She worked on a farm in Boldon for many years which included potato picking, shedding turnips and other tough tasks, later working at the Brian Mills factory. Most working class women in the 1920s worked their entire lives.

By 1954, Iris married again, and here assumed the surname she would carry to her grave- “Amos” wedding a man called Albert. They would have a larger family which would eventually extend to six grandchildren, nine great grandchildren and one great-great child. One of their sons however would die at just 34 years of age. Albert passed away in 2005. In her retirement, she moved to Lilburne close in the East End in a small cottage, where she would remain until she died.

However, her final years would in fact be her golden years. Starting from 2018, Iris’ family began to film her and post about her life online, which proceeded to transform “Little Nana Iris” into an internet sensation, the most unlikely “influencer” you’d come across. Her videos became popular due to her very frank and brutally honest approach to everything. She was small and frail, but you didn’t mess with nana Iris. On one video, she is filmed eating a Sunday dinner in an undisclosed restaurant. Unimpressed, she describes the carrots as “Hard as the Rock of Gibraltar” and says “no more”.

Her popularity also came from the fact she never seemed inclined to let age hold her back, showing a youthful and energetic approach to elderly life. The video that shot her to fame involves her doing the viral “Baby Shark” dance in front of the Sunderland Town Moor which gained over 1 million views on Youtube. Unfortunately, her stint as a social media star was short but sweet. Nana Iris would take ill in the early months of 2020, and passed away on April 1st. She is buried now in Grangetown Cemetery

In summary, Nana Iris was the character of a time. To the world, she was a funny grandma, but to us in Sunderland even if we did not know her personally, we otherwise knew her because she embodied a sense of familiarity and closeness which we could all associate with people in our own families. The bigger picture is that Iris lived an extraordinary and dedicated life and not just in her latter years. Her life itself is a true Sunderland story, a story of hardship, perseverance and hardiness, yet incredible spirit, humility and much love.