North Star Halloween Special: The Night of the Sunderland Spectre 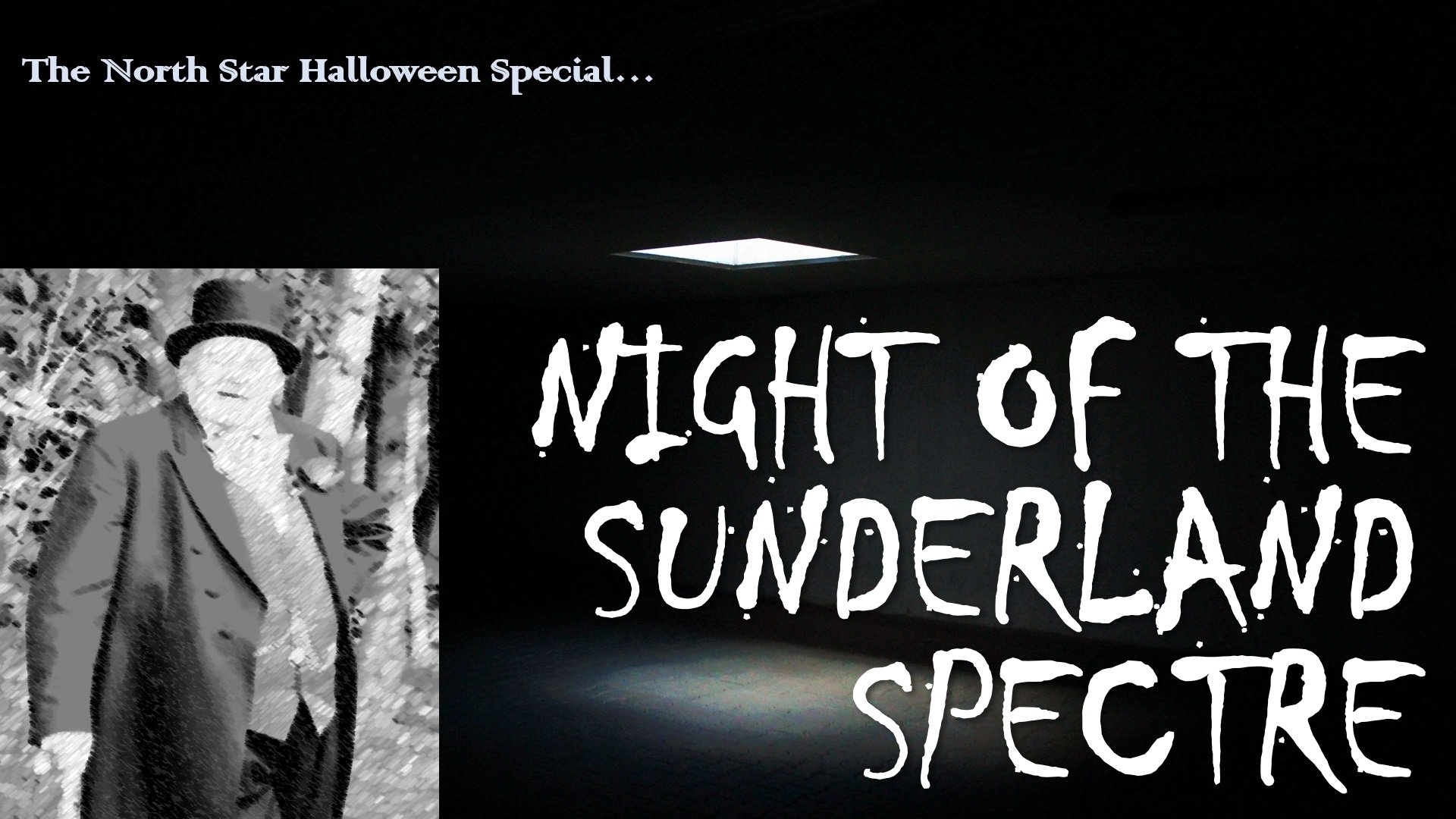 Background introduction: Sophie Scott of Thorney Close is the North Star, a legendary hero called to defend Sunderland the North East from all kinds of monsters and villains. She has special powers, shining army and a magic sword known as Cargast.

Sophie: “Have I heard what?”

Eddie: “There’s been a burglary down the town!”

Sophie: “That happens all the time man… have they checked the CCTV?”

Eddie: “Nor Sophie, there’s something different bout this like. Check this out in the Echo, the burglar looks like a ghost”

Sophie: “Give me a look!” *takes the newspaper* “Looks like he’s jumped out of the 19th century, he’s all dressed up in a top hat and suit!”

Eddie: “Aye, and neebody recognizes him. It’s not the first time either. That’s why you need to gan down help”

Sophie: “The article says he is stealing old paintings, call him ‘The Spectre’ and they reckon he’ll strike the museum soon”

Eddie: “There you gan then, get yersel down there tonight”

(That evening, at Sunderland Museum)

Sophie: “Hiya, I’m here about the Spectre. It’s me, you know… the North Star”

Police Officer: “Alright Sophie, we’ve meaning to call. We could really use your help tonight”.

Sophie: “So what’s going on, exactly?”

Police Officer: “This fella is the sneakiest burglar we’ve ever dealt with. He’s recently burgled four galleries across the city, and every time he manages to get in unnoticed and escape.”

Sophie: “So what makes you think he’s coming here tonight, and not somewhere else?”

Police Officer: “We received word from an anonymous source that there’s an old painting of Tunstall Hill upstairs that he wants to steal, so if not tonight it’s going to be soon.”

Police officer: “Good question. We’re going to be waiting at all the exits, but we’d like you to be upstairs to try and ambush him. Sound good?”

Sophie (muttering to herself): “Two hours and nowt. I’m shattered.”

*A Heavy Breathing noise appears from an unknown direction*

*Sophie sees a dark figure of a man in a top hat and tailcoat approaching. No face is visible in the night*

*Sophie unleashes Cargast and charges at him, but he moves out of the way at an unnatural speed*

*He jumps out of the window, Sophie follows, leading to a chase through the street*

Sophie (on her phone while running): “Hi this is Sophie Scott the North Star I’m chasing the burglar from the museum he’s took the painting and running into the East End!”

*The chase continues, until he disappears into a building*

Sophie: “So this is his hideout…”

Police Officer (running to the scene with colleagues): There you are! He escaped into here?”

Police Officer: “What? This old Masonic Hall? Alright then, block off all entrances let’s get him on the inside…”

*They search the building, an Old Masonic Hall, but find nothing”

Police Officer: “Well that’s odd. There’s nowt in here, no sign anyone is using this as a hideout or den for stolen property, or any sign of anyone going in or out, and no painting either”

Sophie: “Well at least you know where to look now”.

Police Officer: “That’s right miss, let’s get this area cordoned off and watch it round the clock. You can come back and help us tomorrow night!”

Sophie: “You know, I really think he might be a ghost. You realize this building is haunted right?”

Police Officer: “So people keep saying. It’s odd, but my bosses aren’t going to buy a ghost story when we’re talking about thousands in stolen property. We’ve got a job to do here, but if you feel that way then make sure you bring Scooby and the Gang tonight”

Sophie: “The Gang? That gives me an idea…”

(The next afternoon, at The Dun Cow, Sophie’s workplace)

Micky: “A Ghost? If I never knew yer I’d say it was all a load of bollocks, but things have changed forever.”

Sophie: “Exactly. He’s definitely a supernatural being, he moves too fast for a normal person as if he’s like floating, keeps disappearing, and is hiding in an 18th century building”

Micky: “I mean the coppers are useless anyway, but nee wonder. Tell yer what, let’s gan down there tonight”.

Police Officer: “Long time no see Sophie, is this Shaggy Doo then?” (Pointing to Micky)

Micky: “Ow man plod, she’s only doing this out of goodwill. You actually get paid for this.”

Police Officer: “Nah, if we were stealing a living then we’d fit right in down Hendon wouldn’t we? But we don’t? So are you going to go after this ‘Spectre’ bloke or what?”

Police Officer: “Okay, let us know if you find anything. We’ll be outside guarding the entrances as usual,”

Micky: “Yer mean standing there and deeing nowt, got it!”

Micky: “Christ on a bike it’s dark in here like”

Micky: “So this place was for freemasons?”

Sophie: “Yeah I think so. It’s so cultic, chess board like floor, cryptic symbols, it’s creepy as…”

Micky (shouting): “Ow man, stop pissing about and show yourself!”

Voice: “Why do I need to show myself, when I’m all around you? Picture me, where might you see me?”

*The doors of the room slam shut and lock in tandem*

Sophie: “Who are you, and what do you want?”

Voice: “To return what is rightfully mine! What this world has taken from me”

*The Chairs in the centre of the room lift up and fly around, as the shadow of the spectre appears*

Sophie: “People don’t get to keep their possessions after they die! If you are a ghost, we ask you to return to your resting place and hand back what was taken”.

Voice: “What is mine, will always be mine”

*The Room lights up. On the chair at the front of the room, the stolen painting of Tunstall Hill appears. The full figure of the Spectre then emerges out of it.*

Sophie: He came out of the painting… as if it were a portal… “

Micky: “Oi Ghost figure, who are you? And what do yer want?”

The Spectre: “Well if it isn’t my misfortune to encounter you miserable cheeky brats. I have been here in this town long before not only either of you, but before your parents, your grandparents, great-grandparents and henceforth. I am not dead, but I am a powerful magician. I was trapped inside of my paintings for 200 years, but now I am free, and I have set about regathering my lost masterpieces, using them as a network to transport around. You will not stand in my way!”

Micky: “Or else what then you fancy hat pratt?”

The Spectre: “Or else you will perish!”

*The Spectre makes a long iron candleholder fly and lashes it off Micky’s head, seemingly knocking him out*

Sophie: “Micky! Alright then Spectre, if it’s a fight you want then Ha’way!!”

*Sophie tries to attack the Spectre with Cargast, but he disappears*

The Spectre: You are but an amateur, child…”

*Sophie strikes again but misses. The Spectre sends another candleholder flying, knocking Sophie off her feet and onto the floor*

The Spectre: “Discipline is good for unruly, young people like yourself isn’t it?”

*The Spectre hits Sophie with the candle holder again and again, as she moans in on the floor*

The Spectre: “Had enough yet dear?”

The Spectre: “Now, allow me to serve the final blow…”

*The Spectre Gets up and walks over to her, picking up the candleholder”

Sophie: “Would you like to see a magic trick?”

The Spectre: “Have you not heard the saying, can’t teach an old dog new tricks? I have nothing to learn from you insolent child”

Sophie: “No, but you have painted yourself into a corner!”

*Sophie picks up Cargast and hurls it like a javelin through the painting on the chair, ripping a clean hole in it*

Micky (Getting up): “Ahh me head man… ah shit the Coppers aren’t gonna like that. Stuff them though”

(Later, back outside, the Policeman isn’t too impressed, but the day is saved again)

Police Officer: A destroyed priceless artwork combined with a bollocks story of a 19th century man who uses it as a magic portal after being trapped there for hundreds of years. My boss isn’t going to be pleased at that, but at least you found the rest of the material. Sophie Scott, as much as you are a headache to us time and time again, what would we do without you?

Sophie: “Well you could say without me, your job is like watching paint dry. Literally. Right, time to take this lad to the hospital to check his head out”

Police Officer: “Shouldn’t be much of a problem not like there’s much in there anyway!”

As they leave, a mysterious blob of black paint like substance drips from the side of the building in to the gutter.

This is what Sharon Osbourne looks like now, as former X-Factor Judge reveals “horrifying” new look

North East Screen to Relocate into the Beam