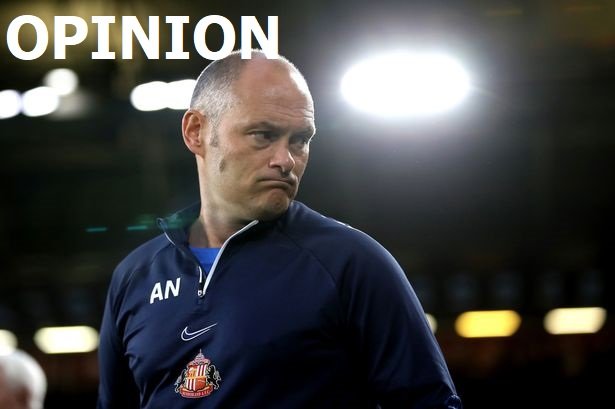 In unbelievably Sunderland AFC fashion over recent seasons, fans entered the season with renewed optimism at the teams performances and results back in the Championship, only to have the rug tugged at from under everyone’s feet once again. The rug has not been completely pulled, but there is a real sense of unease at the prospect of losing a manager who has managed to turn the tide and get us off to a good start. Reading the recent club statement, it appears that as part of Alex Neil’s recent contract renewal which was only signed four weeks ago, permission to approach Neil from clubs had to be granted. My initial reaction to the approach from Stoke was, why would he be interested?

But to watch on as it was confirmed Alex Neil would not be in the dugout for the visit of Norwich to the Stadium of Light and then witness the footage of him watching on at Stoke, hoped that this was a ruse by Neil to be offered better terms or force the hand of the club in terms of recruitment for the squad, appear to be way off the mark; Alex Neil to Stoke is a ‘done deal’ and I believe this all started prior to Friday’s reports of Stoke’s interest. Reportedly, Alex Neil will double or almost triple the salary he was on at the Stadium of Light.

When Alex Neil was appointed, a section of Sunderland fans had built furore with the potential return of Roy Keane. Keane apparently declined the advances of the club as they would not commit to a longer term contract than Keane would have liked. Although disappointing at that time, the club had not had great success with recent managers, and if things did not work out, the cost of removing another manager from the helm at a huge cost to the club was an unwanted proposition. Alex Neil was given the opportunity to return to management with Sunderland and this move has seemingly worked out extremely well for both parties and could have been the start of returning Sunderland to a stable club with a young squad and rising ambitions.

I do not believe the club can be blamed for the contract situation with Alex Neil. He has done amazingly well since coming to the club and guided us back to the Championship via the playoffs. He signed a new contract and, on the approach, made by Stoke, was offered fresh terms in a bid to tempt him to stay. I think this was reasonable enough given that I would not have thought the club would have offered fresh terms without assessing the start of the season, the results and performances, the squad building and how Neil and the club worked to recruit players in his first full transfer window? I do not think anyone would have envisaged a club sacking their manager and making an approach so early into the season and seemingly, it appears Neil was happy with a year rolling contract and has insisted in the clause to force the club to give him permission to speak with other clubs.

For me personally, I do not think the club should have agreed to this clause being approved, why would we want to make it so easy for a manager to speak to other clubs without it being on the clubs terms as the club look to finally have some stability. I feel it shows an incredible lack of ambition from Alex Neil, moving to a club no bigger than Sunderland this early into his reign. Reportedly, Stoke are in financial difficulties and will be unable to strengthen a team of players who were very poor against us last week and managed a nervy win over Blackburn yesterday.

Let us not be naive in thinking we are world beaters or promotion wannabes just yet. From the end of last season and looking at the size and capabilities of the squad, plus our performance at Wembley, I think any fan with reasonable judgement would understand Sunderland need to improve the squad drastically before hoping for promotion. I do not think we are close to a squad capable of competing at the top of the Championship table all season and especially be comfortable in avoiding relegation on a return to the Premier League.

I was present at the Stoke game last weekend, we beat a usually well organised and difficult team to beat, but as stated above they were very poor against us, at a ground renowned for its ability to make any team visiting to get a decent result difficult. We were worthy winners on the day, the Sunderland fans were louder and more supportive than the Stoke fans throughput the 90 minutes and they were sitting precariously above the bottom three ahead of their win yesterday. While Sunderland appear to have the feel good factor back, the murmurs from Stoke fans after the game would offer very little optimism at any prospect Stoke could achieve anymore than Sunderland this season.

There is no turning back for Alex Neil now, the crowd showed their frustration against Norwich and this situation will have impacted on the players so close to such an important game that we then went on to lose, undeservedly. I did feel that having Martin Canning in the dugout was a mistake, other staff that are not expected to follow Alex Neil would have been a more viable option, but the squad was set up with Neil’s tactics which may have forced the clubs hands. I, as all fans will be, have been glued to the updates as they arrive, from every source possible. Yesterday, Tony Mowbray was believed to be the man the board were close to appointing, today, Robbie Fowler’s name mentioned. I feel the club would not have such a shortlist yet, I do not believe they would have spoken to anyone just yet.

This all seems to have hit the club hard on Friday, it appears the club did not expect this to be the outcome. Watching Speakman’s interview prior to the Norwich game, the club tried to prevent Alex Neil moving to Stoke and unfortunately, the process of recruiting the next manager begins once again. Ole Gunnar Solskjaer, Gareth Ainsworth, Grant McCann, Roy Keane, Duncan Ferguson, Darren Ferguson, Jonathan Woodgate and Michael Carrick are just a few of the many names now linked with taking over the helm at the Stadium of Light. Fans will all have their own opinion on who they want in or why someone should not be appointed, I for one was not overly optimistic when Alex Neil was appointed but was proved completely wrong. I do not believe Tony Mowbray would be a good fit for the club, his tactics would surely not get the best out of a young squad with his direct play a million miles away from the passing and possession based style these players have been brought together to play.

Another name which will probably be mentioned at some stage will be Kevin Phillips who seems to be linked each time the job becomes available. He is doing a very good job at Sotuh Shields but I still feel this would be a step too far too soon for someone who would be committed to the club should he ever be appointed. My belief is we want a committed, long-term option, a younger person who can work with the young squad at their disposal. The person I would be hoping to see in the dugout on that basis would be Sean Dyche; unbelievably good job with unfashionable Burnley, built a good young squad who would fight. Not only did Dyche get them promoted, but he made them into a consolidated Premier League squad and I feel he could do a great job of helping to shape the squad ready for the eventual promotion bid.