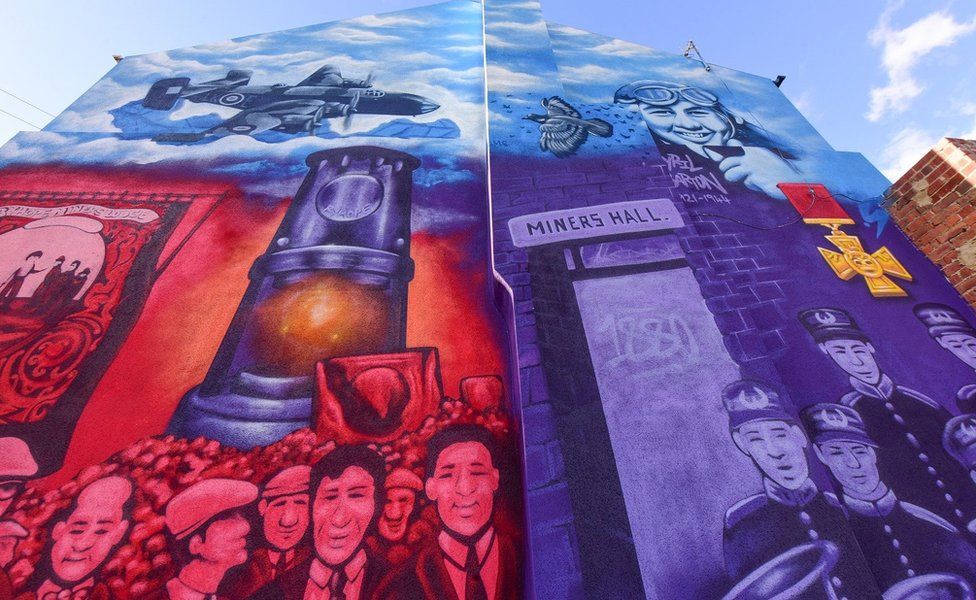 A mural commemorating Ryhope’s history has been celebrated.

The mural was painted by local artist Mark One87 and assistant artist Finn Kelly and it illustrates the different stages and events in Ryhope’s history. It shows farming communities which shaped the landscape before the colliery was established in 1857 and then closed in 1966, plus hospital workers, a miner’s lodge, colliery bands and a miner’s lamp.

Flying above is the Second World War RAF Halifax bomber and the face of its pilot Cyril Barton. In March 1944 after a night raid on the German city of Nuremberg he nursed his damaged plane back over the North Sea. As fuel ran out and his plane descended he steered away from houses and Ryhope pit as it crash-landed.

Barton was pulled alive from the plane’s wreckage but died of his injuries before reaching the hospital. He was posthumously awarded the Victoria Cross and his name is also commemorated with the Barton estate and Halifax Place.

Measuring more than 25 metres (more than 90ft) long and 10 metres (more than 30ft) tall, the mural was painted this summer over two weeks in August. It was celebrated with a special event at Ryhope Community Centre with residents and school children hearing more about the mural from Mark.

Chair of the East committee and Ryhope councillor Martyn Herron said: “ We’re all very proud of our history and heritage and we now have this fittingly commemorated on our mural.

“It’s an excellent reminder of who and what has helped shape our village. We’re very grateful for all the feedback and comments we received about what should go on the mural and are pleased that we could celebrate it with this event at the community centre. Thank you to everyone who has helped shape this work and enjoyed the celebration”.

Mark, who has completed other murals at the Tyne Tunnels, Mr Mulligans and Geordie Shore said: “It has been a great project to work on and I am very grateful for the opportunity to create something to showcase the heritage of Ryhope”.

Other Sunderland wall murals include riverside and shipbuilding scenes at Panns Bank, close to the Wearmouth Bridge, and Sunderland AFC legend Raich Carter on a gable end in Commercial Road. Moreover, this is not the only work that Mark has done in the past and there are a few examples just below.