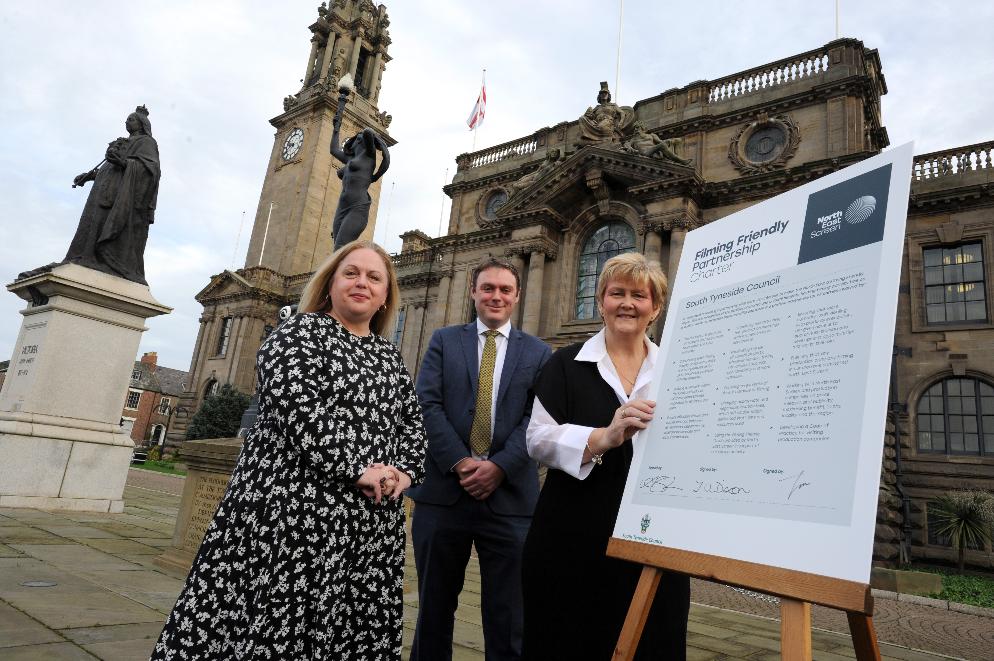 South Tyneside Council is working to make the borough film-friendly.

The Council has recently signed the Film Friendly Charter with North East Screen to show its commitment to working in partnership to make the North East a filming-friendly region.

The signing builds on the Council’s support for the region’s TV and Film Production industry as part of the North East Screen industries Partnership (NESIP). Last year the BBC pledged to increase production and support for the creative sector, with a commitment to invest almost £25m in the region over the next five years to fund TV production and talent development.

North East authorities agreed to provide a combined additional £11.4m over the same term. The BBC has referred to the partnership with the region as its biggest investment in the North East of England for decades.

Councillor Tracey Dixon, Leader of South Tyneside Council, said: “We’ve already signed a memorandum of understanding designed to breathe new life into our regional film and television industry. Signing the Charter is the next step and renews our commitment.

“The Film-Friendly Charter recognises the positive economic and cultural benefits hosting filming activity has on an area, bringing jobs and economic investment into the region.

“Being a filming-friendly council is about maximising the benefits of bringing productions to the borough and making it a positive experience for everyone involved. We will provide a single point of contact for production companies, build a network of all council departments impacted by filming, facilitate the use of council property and work with the North East Screen on publicity”.

The screen industry brings jobs and economic investment into the region and the Council, as part of NESIP, is working to deliver a new Screen Industries Development Programme. It is aiming to attract more inward investment and create “good quality- well-paid jobs” within the industry while developing, attracting and retaining talent in the sector.

The scheme includes scaling up the region’s screen agency and delivering increased activity, alongside a production development and support fund, with further opportunities to develop business and skills that the sector needs to thrive.

Alison Gwynn, Chief Executive of North East Screen, said: “We are working closely with the North East Screen Industries Partnership and the BBC to encourage and promote filming across the North East. We want all parts of our region to benefit. It is important that each local authority area is committed to welcoming production crews and making the process of filming as smooth as can be.

“The economic and tourism benefits of a production crew filming in our area and the jobs it can create for a local crew, as well as local businesses across the supply chain, is something we don’t want any part of the North East to miss out on”.