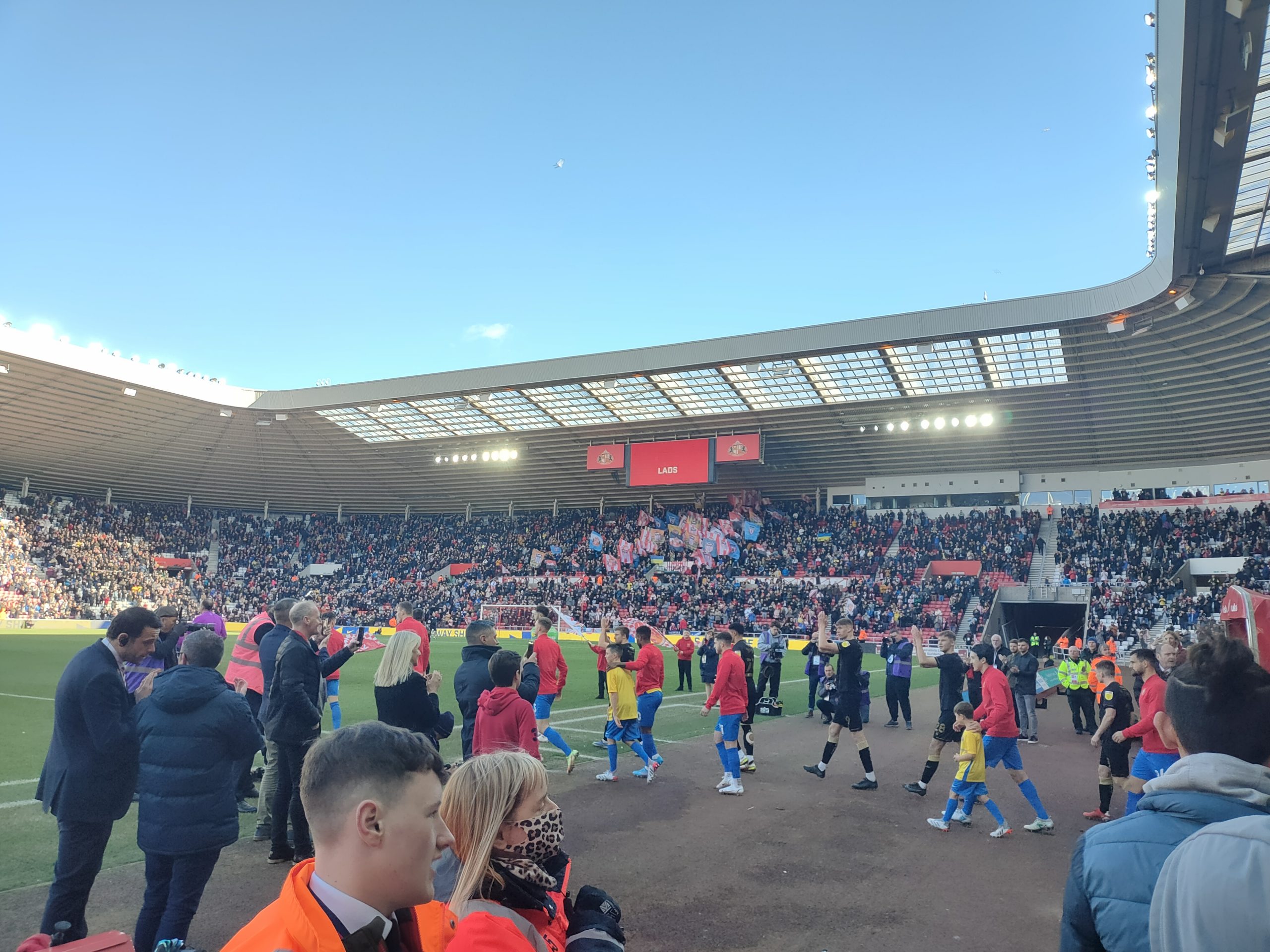 Sunderland kept their play off hopes alive after 2 late goals allowed them to take home all 3 points.

Crewe played extremely defensive throughout which proved to frustrate The Black Cats’ as they continuously struggled to break them down.

The only half chance came in the 39th minute from a Jack Clarke corner which saw Ross Stewart head the ball towards goal but it was easily saved by Crewe ‘keeper Dave Richards.

The visitors had the better chances as the second half progressed with Crewe striker Chris Long failing to capitalise on lackluster defending from Sunderland twice after firing a shot wide and volleying the ball straight at Patterson not long after.

Alex Neil decided to make 3 substitutions, bringing on Dan Neil, Leon Dajaku and Patrick Roberts and what a difference they made.

The game soon changed after the introduction of these 3 and Sunderland started to press on for the win.

The first chance coming from Jay Matete as he sprinted into the box, beating a few players but he was unable to squeeze the ball past Richards in goal.

6 minutes from time the ball was played into Ross Stewart on the edge of the box and held of the defender brilliantly before laying it off for Dan Neil to smash the ball into the net from 20-yards out.

A few minutes later, Jack Clarke picked up the ball just inside the Crewe half and knocked it on to Patrick Roberts who played the ball back to Clarke before charging forward.

Clarke was able to play it back to Roberts who found the bottom right hand corner with aplomb.

It was another poor performance today from the lads but they stuck at it!

Alex Neil, for the second week in a row made the right substitutions at the right time and it changed the game significantly.

The lads played brilliantly for the last 20 minutes but I just wish they could play that well for the whole 90 minutes.

But as Neil said on Tuesday, at this stage of the season it’s the 3 points that are priority and at the moment we are winning games despite the performances and that’s all that matters.

We are now 5 games unbeaten and I think the new head coach is doing a great job with what he’s got!

A very quiet afternoon once again from the ‘keeper and dealt with anything that did come his way.

It was a decent performance for the midfielder come defender. Battled well and always looked to play the ball forward.

Didn’t do too much wrong, some of his passing was off but never made a mistake that cost him dearly.

He did ok in the back 3 and defended well. Some of his long balls forward were slightly poor.

Did slightly better than Tuesday but he still was nowhere near good enough. Loses the ball too often and offers nothing going forward.

Another typical Matete performance. Battled well in midfeild and he is never shy to get forward.

A quiet afternoon for the American today. He seemed to play the ball backwards too many times and rarely took on his man.

Was always trying to make things happen but up until the last 6 minutes it rarely worked for him but he gave 100% throughout.

He needs better service. We know what Defoe brings and without service it’s pointless him being on the pitch.

Looked slightly lost today and not much came off for him. He did do brilliantly to play the ball to Dan Neil to set up the first goal.

Made a huge difference when he came on and Crewe struggled to cope with his pace and trickery.

Similar to Leon Dajaku and finished his goal fantastically.

He was always looking to go forward when he came on and changed the tempo of the game. Again, a brilliant finish for his goal.

Man of the match – Carl Winchester