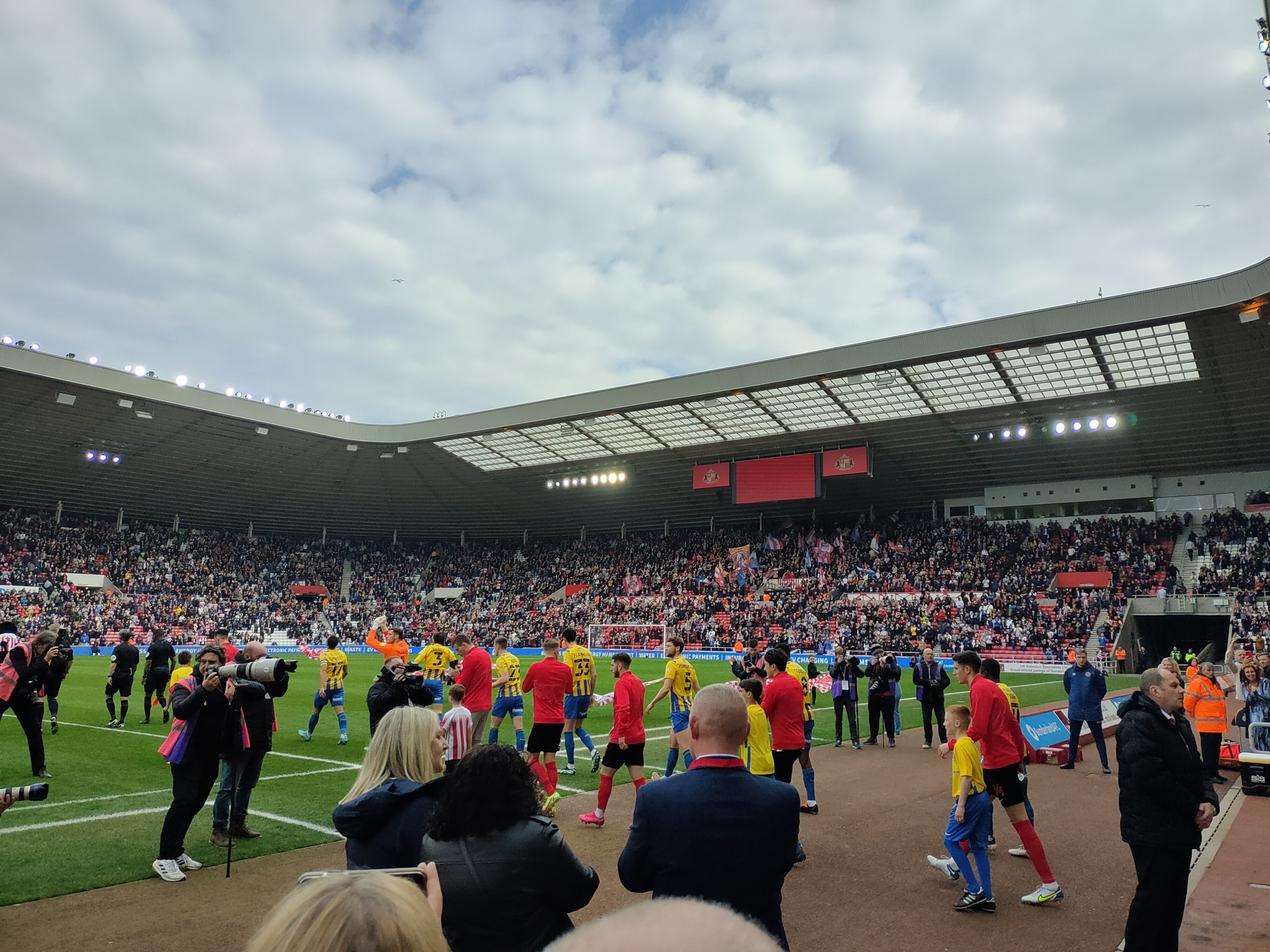 Sunderland secured a huge 3 points at the Stadium of Light which sees them in 6th place, level on points with Wycombe in 5th but with a game in hand thanks to yet another last minute goal by Nathan Broadhead against Shrewsbury Town.

The Black Cats’ got off to a brilliant start after a free-kick which was hit into the wall and came out to Elliot Embleton who hit an absolute rocket into the top corner.

9 minutes later, Dennis Cirkin had a shot from 20-yards out and the Shrewsbury ‘keeper made a decent save but it came out to Nathan Broadhead who buried it into the back of the net to make it 2-0 after just 13 minutes.

The Shrews started to get into the game towards the end of the first half after the lads took their foot off the pedal.

Sunderland started the second half the same as they finished the first, lackluster.

5 minutes into the second half, The Shrews got a goal back thanks to Josh Vela who couldn’t really miss after a brilliant ball across goal by George Nurse.

Just 8 minutes later the game was level at 2-2 after Anthony Patterson made a save from a Matthew Pennington header and former Sunderland defender Tom Flanagan volleyed home in front of his former supporters.

The Black Cats’ started to fight to regain the lead and after 72 minutes, Ross Stewart lashed a powerful shot which rattled the crossbar.

The home supporters stuck with their team until the very end and it paid off as Jack Clarke floated a ball into Nathan Broadhead who flicked it past the Shrewsbury Town ‘keeper which lifted the roof off the stadium in the dying minutes of the game.

A weird game but I’ll take it.

We were brilliant for 25 minutes and we looked as though we could run away with it and increase our goal difference significantly.

It wasn’t good to see us take out foot off the pedal and struggle today but the result is the main thing.

3 weeks in a row we have managed to secure last minute winners and it’s brilliant to see that the lads keep believing until the very end!

Couldn’t do much for the 2 goals.

Comfortable enough, didn’t do too much wrong.

Similar to Winchester, got caught up in a tangle on the edge of the box which allowed the space for the first Shrewsbury goal.

Some nice touches here and there but overall was pretty quiet.

Gave 100% as usual but gave the ball away too often.

Amazing strike for his goal and quite often looked dangerous going forward. Seemed to disappear in the second half before being taken off.

A very frustrating game by the American. Always gave 100% but his end product just isn’t good enough and he struggled to beat his man.

Similar to Gooch, many wayward crosses and struggled to get passed his man, however 1 moment of quality from the youngster gave Broadhead the chance for the winner.

Took both of his goals brilliantly, quiet at times but he was always looking to make runs and receive the ball.

He was very unlucky not to score as he hit the crossbar, needs far better service as he barely gets a touch of the ball at times.

Did a decent job when he came off the bench. Didn’t make any mistakes and he was always looking for a forward pass.

Added pace to our attack but yet again poor with his final product. However he did well at times to get us up the pitch.

Didn’t really have time to make a difference after coming on.