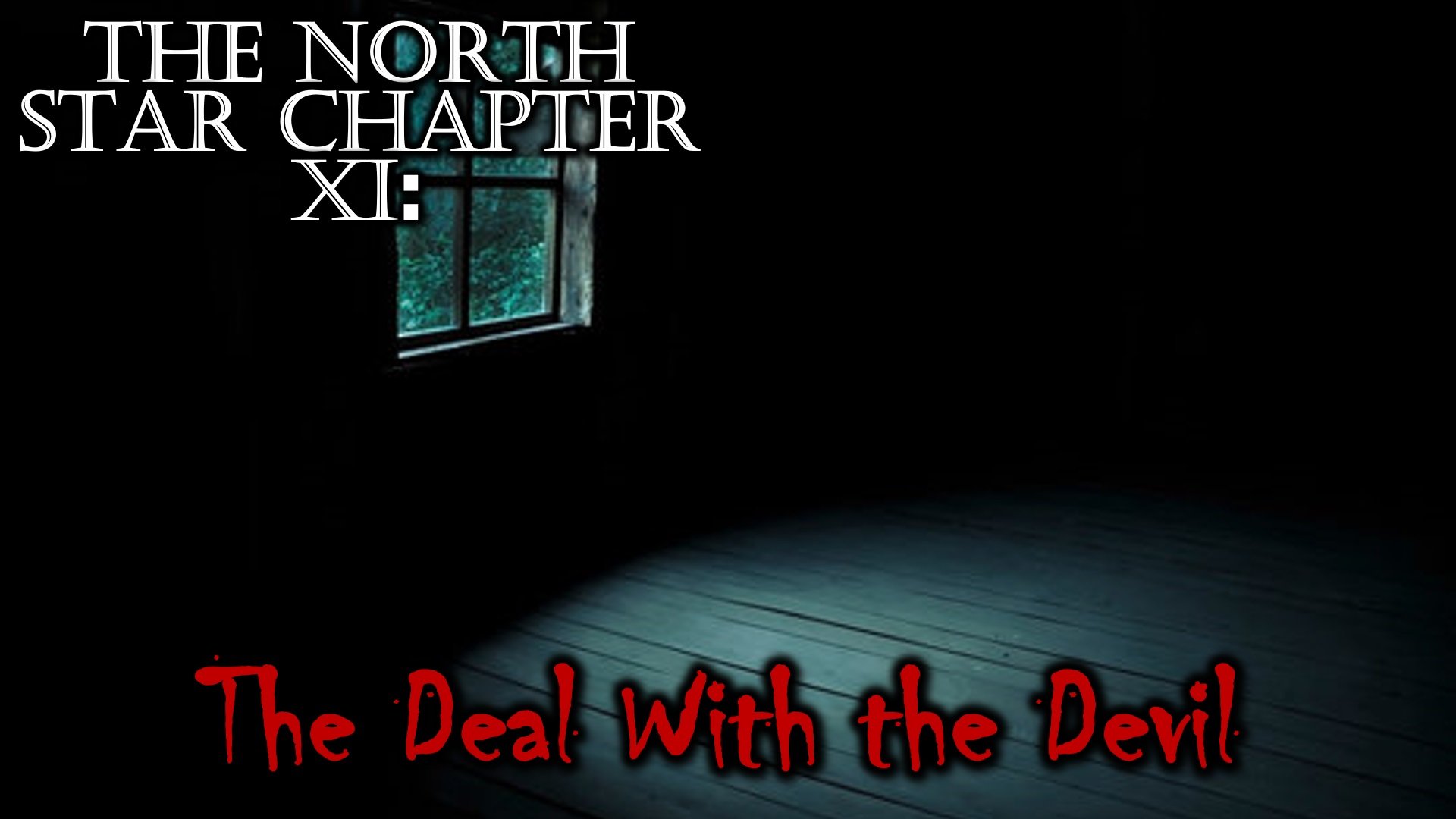 For a contents of all North Star Chapters Please See Here

It was a dark night. The aurora of the moon was smothered by a blanket of thick, black clouds, of which suffocated the twinkle of the stars. The wind howled as drizzle poured from the sky and created an ambient rattling on the windows, as a man walked downwards an equally lightless corridor in his dressing gown. He quietly proceeded to grasp the iron handle of an old wooden door, creaking it open and stepping inside a cold and uninviting stone room. On the walls, a series of rune like features had been painted on in red in a symmetrical pattern across the room.

The man closed the door behind him before pulling a lighter out of his pocket and slowly proceeding to light two red candles perched upon long black stands in the middle of the room. He then looked downwards to beneath the candles, where a large black dish like object sat underneath. He proceeded to reach into his pocket again and remove a small red silk pouch like bag. Opening it, he poured out of it a deep, dark blood red powder onto the dish. Clearing his throat, he then spoke confidently, but softly.

He repeated the incantation several times, and then proceeded to wait. There was silence for several moments, until all of a sudden, the powder in the bowl appeared to blossom into an intangible fire like substance of the same colour. It spiralled upwards, creating a ring around the same man. Then directly in front of him, the apparition of a figure appeared. It had the essence of a shadow, the dark outline of a person without features or detail. Yet, it stood as if it were corporeal, right in front of him.

“My lord…” the man said nervously and fearfully in a refined voice, immediately getting on his knees to bow. “Report…” the figure responded suddenly, speaking in a dark, low pitch and inhumane like voice. “We have placed her in jail…” the man replied fearfully as he got back to his feet. “She has been taken care of, but attempts to kill her with the Redcaps failed… so we decided to frame her for their disappearances to avoid suspicion” A look of terror then came onto his face as the figure stared at him in silence for a moment.

“I am aware of that.” It spoke in a cold but calm voice “But I thought I’d hear it from you first…. What is the meaning of this? Imprisonment is only a temporary delay, and not what I asked. She isn’t even in OUR custody. The order was that unless she submits, she must be killed, especially before she finds it first… And I don’t suppose you are any further on telling me where it is either? Are you?” The shadow snarled. “We are working on it… we are searching every avenue and leaving no stone unturned.” The man replied in an almost pleading like voice.

“Spoken like a true politician”. The figure grunted. “Fulton, it is evident that you have used the benefits I have gifted you, our work, as little more than a vehicle to advance your own vanity project. You are as slimy and sleazy as you are useless, cowardly and treacherous. This is not a game, yet I have persistently offered tolerance and patience to your idle words. You summon me and pledge allegiance, but you speak from the prickles of your lips and not from the essence of your heart. It is disingenuous, lest you forget who you truly are, and what you were…”

“You William Parker Fulton, stood at the point of desperation in the confines of mortal misery. You may have been wealthy, but your alcoholism was killing you and you faced terminal liver cancer. It was in your darkest hour you found me, forging an eternal oath and promise with me that I might cure you, give you another chance and fulfil your dreams, in exchange for your unshakable support… lest if you fail, I claim you as my own. Is this vanity, this stupidity? How you repay your saviour?” It raged at him.

“My lord… I am sorry…” the man wept. “It will be done…” he cried. “You are well aware she will escape, in which case you must use the time you have left in order to find the Caenterstaff first, then I shall take care of the rest.” The voice hissed confidently. “I sense that she and her friends have already received information on where it is, which should make it simple enough for you to work out what to do now…. You shall bring and present to me the Caenterstaff, in no longer than 120 hours from the point of this conversation. Fulton looked at him with desirous eyes. “Yes, I think that is all the information I need! It will be done my lord!” He spurted out with a superficial excitement, masking his fear.

“But a word of warning Fulton… this will be your last chance; this timeline is arbitrary and your political connections and secret combinations cannot save you from the fate which awaits if you fail me. You shall do it yourself rather than outsourcing it to common crooks. Your material lust for man-made power in office is inconsequential to the establishment of the eternal kingdom, in which it is me you serve. I will be watching!”. He snapped. As soon as the figure finished talking it proceeded to abruptly disappear in the flash of an eye.

The fire circle around them then burst upwards, transforming back into the blood red powder it erupted from, collecting again in the dish in front of him. Both candles then suddenly blown out, leaving William Parker-Fulton standing alone in the darkness. He gulped to himself, shivering.