The Sorry Story of Sunderland Station: Does A Brighter Future Await? 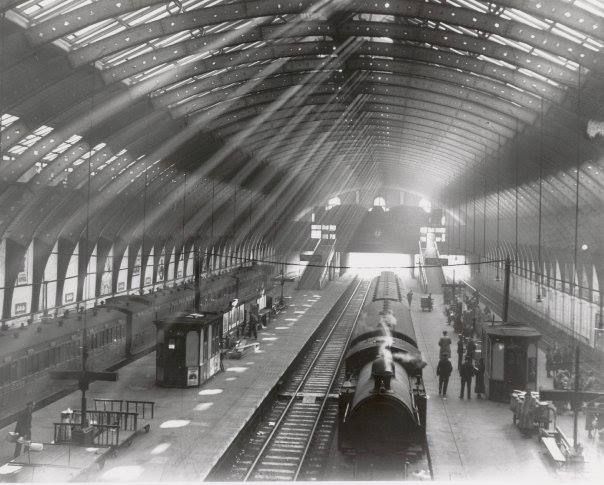 The news recently broke that Sunderland station’s upward exterior will completely rebuilt. Starting from December, the Southern end of the station will be closed and demolished, which will then be reconstructed into a new glass façade which is expected to be finished in March 2023. Undoubtedly, the Sunderland public are cheering the news, of who have long bemoaned the transport hub as one of the worst aspects of the city.

In contrast to the enormous and classical grandeur of Newcastle City Station, its counterpart in Sunderland became notorious for its grim, ugly and uninspiring design which make it unfit for purpose. But as the featured picture suggests, it didn’t always look like this. In fact, it looked once quite like Newcastle’s. But what exactly went wrong? How was our railway station so appallingly let down? and do these long awaited changes finally bring a brighter future? Let’s find out.

Sunderland Central Railway Station was opened in 1879. It was a golden age of the railway. It was not *the* railway station of the city, but in fact one of many. Replacing the former Fawcett Street Station which is now occupied by the Civic Centre, the new hub set at the heart of a network which connected it to the City of Durham and the broader East Coast Mainland. As shown in the picture, the original station had a grand classical design with an arched ceiling and a finely decorated interior. It was never of course the regional centre of railway travel as Newcastle was and still is, yet it was nonetheless bigger and wider in the scope of destinations than it is today.

But history would not be on its side. The station would be painfully stung by the unlucky legacies of three decades, the 1940s and the the 1960s. The first would see the station bombed throughout World War II, destroying its roof and exterior in 1943. The second, the 1960s, would see the infamous “Beeching Axe” come down over Britain’s railways, dramatically closing stations and lines all over Britain. This seen the Leamside line closed down by 1964 and severely reduce Sunderland’s railway footprint in scope, isolating its place in the broader national railway network which was also compounded further as coal declined in the following years. This meant the rebuilt station would be reduced in size, and the unused “hidden” platforms are a legacy to this.

But that was not at all. The bombed station, as with all bombed things in World War II, would be rebuilt in a hideous 1960s cost-saving utilitarian design, creating the “box” design up above, with unappealing “Umbrella” coverings underneath. This was bad enough, but eventually, the desire to build more in the City Centre Space above it would soon see the open canopy style removed altogether and the platforms concealed entirely underground. This meant that by the end of the 20th century, Sunderland Station was reduced to a husk of two platforms in a grim underground environment floated on an unappealing design, with a box exterior on the upper level. Before the creation of Grand Central Services to London, it was effectively a glorified Metro Station, a regional station at best.

Bar some very small cosmetic facelifting, the station has remained in this format ever since. Why? As an area which lacks immediate strategic and geographic importance, as well as the privatization of Britain’s railways into a commercial, for-profit initiative, Sunderland Station had became a private asset of Network Rail who did not see any upside whatsoever in making serious investments into the station. There was no gain for them to do so. This meant that the only changes to the station undertook in 2009-2010, were piecemeal. New lighting, new seats, new wall tiles, but no changing of the format. Nexus invested more into the station for its metro services than its actual owners did. The station was widely criticized for not even having features such as a functioning escalator or toilets.

However, political pressure and discontent grew over the dismal state of the station. It seemed inconceivable that a city could have such poor and unappealing transport infrastructure, and local politicians including Julie Elliott MP, began to place pressure on Network Rail to invest. This eventually led to the unveiling of a new refurbishment plan valued up to £27 million. These plans will recreate the exterior in a glass format, as well as extend the number of platforms in the station back to four as it was, a much needed development given it is ludicrous that trains and metros share the same platforms.

But what will this look like in the end? Will it live up to expectations? These are all questions yet to be answered. This plan sounds ambitious, and we live in hope that this will end the grim post-war arrangement that transformed a once glorious hub into the effective shame of the city. In many ways, the station’s life and legacy is a microcosm of Sunderland’s own struggles, the story of something which was grand and glorious, suffered a decline and then struggled to find the capital and relevance to climb out of it. Now it has its chance, and may this be a new beginning.