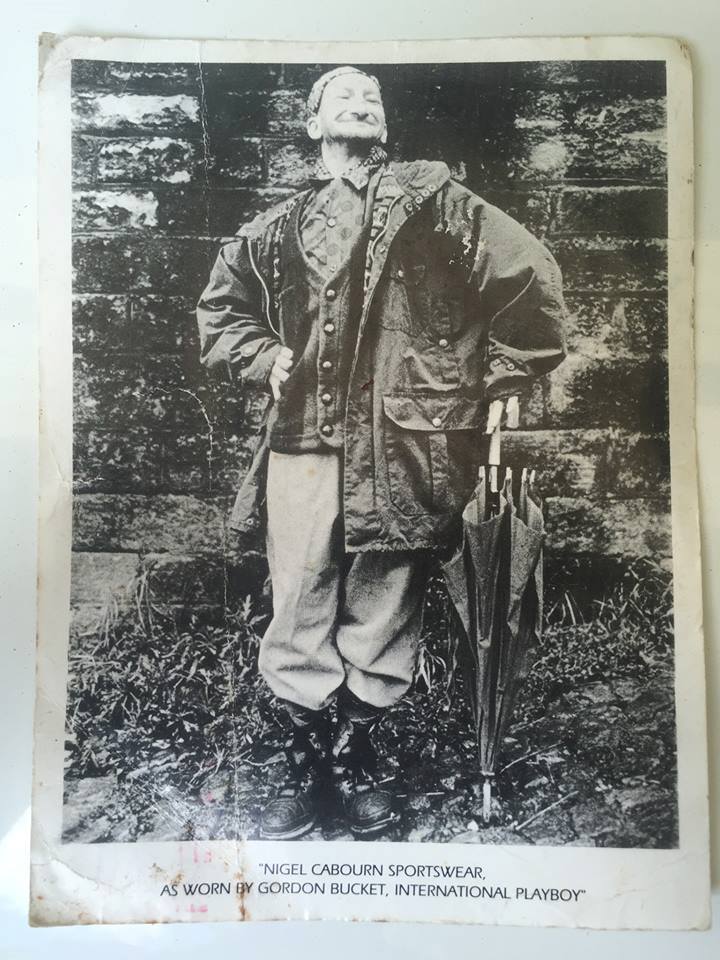 Recently on SGM we’ve been doing a series of detailed write ups on the “characters” of Sunderland their lives, detailing their backgrounds and rise to local fame. Having covered Jimmy Jesus, Goya and Nana Iris, we’re now glad to bring you the story of a frequently mentioned figure who copped the nickname “Gordon Bucket“. Unlike the others however, he’s still alive today and that’s probably left you wondering, what’s happened to him? Here we reveal to you the story of this peculiar figure, who somehow pulled off a stint in high street fashion modelling.

“Gordon Kidd”- as so he is properly named, was born in the year 1951. He turns 70 this year. He grew up in Grindon and went to Broadway School. By his adulthood, he was described in appearance as an “extreme version of Woody Allen” he came to local prominence due to seeking to make his way in the world as a self-appointed car washer, or sometimes as described a window cleaner, the nickname derived from the fact he carried a bucket around with him and constantly solicited people if they wanted their cars cleaning. Those who accepted his services have mixed experiences, with one person recounting: “One day he persuaded one of my mates to let him wash his BMW, and he chucked a full bucket of water at the side of the car before remembering to close the driver’s window.” He also carried out cleaning work in Newcastle too.

The eccentric Gordon never appeared to have married, or have had children. Besides his car washing troupe, he often went around Sunderland employing a range of antics, and also frequented many pubs. As witnesses recalled: “The women on the bus [were] not happy with him. He sits at the back of the bus and makes grunting and other funny noises behind them all..” or that he “always be in the magistrates courts pretending to be a reporter. Would come bombing out the court room and run to the phones to ‘report’ his story.” A particularly famous “Gordon Bucket moment” involved SAFC in 1987, where he was apparently “kidnapped” to an away game by a group of fans and brought to Brentford via train. Distressed, he apparently deliberately “got himself arrested” in order to find his way home.

Despite this rather unique lifestyle, in the late 1980s Gordon’s eccentric take on fashion landed him in luck, and he began to serve as a model for North East based fashion magnate Nigel Cabourn, who was known for his vintage styles. How the two met is not clear, but Nigel recounts his experiences with Gordon on his instagram, where he describes him as “Our model in the boat GORDON BUCKET who was actually a local car cleaner”. He also featured in the magazine wearing his sportswear (as shown in the featured image), where he is described as “Gordon Bucket, an international playboy“. Gordon also had the privilege of modelling for him down in London too.

So you must be wondering, what happened to Gordon these days? As noted, Gordon isn’t dead. However, multiple sources state that he now lives in a Sheltered Accommodation in Silksworth and receives some form of care assistance, seemingly having no children to support him. The decline in his health has obviously brought his frequent public appearances and antics to an end, although he has sometimes been spotted inside of Wilkinson’s Cafe in the City Centre. Some people have told us he still attends SAFC games, however. But for most people, Gordon Bucket remains a fond memory of life in Sunderland throughout the 1970s and 1980s, a funny, amusing and bizarre character who was otherwise trying to make his way in the world.