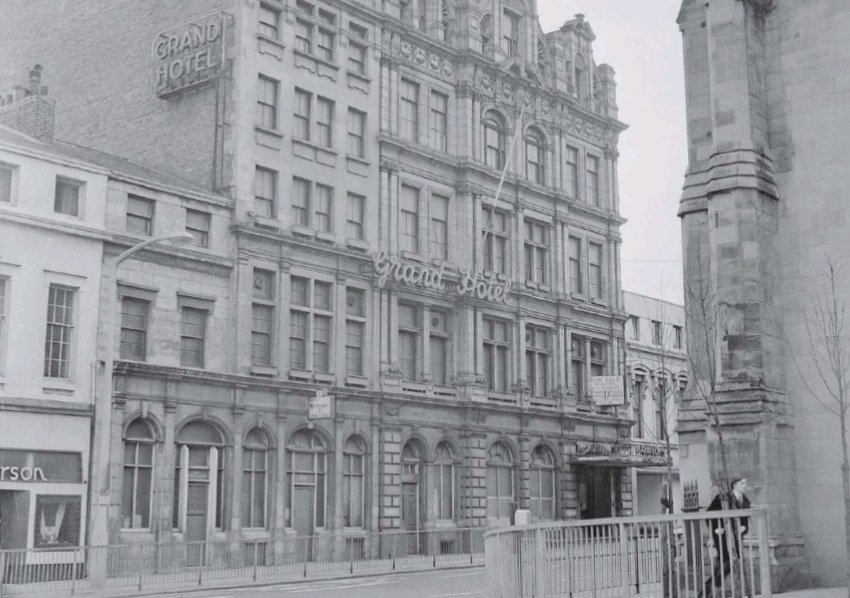 These days, Sunderland and “Hotels” isn’t something that goes together in your head. The city is not known for having a Hotel Scene at all. You have the Grand Hotel on the Sea front (not the one this article is about), the Hilton Hotel next to the Stadium of Light, the new Keel Square Holiday Inn, the new Seaburn Inn, and beyond that a handful of travel lodges and Premier Inns. It goes without saying Wearside is not big on tourism numbers, so it might surprise you that once upon a time the city once had a proper classical high end “Grand Hotel” in the style you’d find in most major locations.

Opened in 1856, the Sunderland Grand Hotel was located on Bridge Street just opposite St. Mary’s Catholic Church, where those dull office buildings are located now. Described as a “landmark” in the City Centre the Grand Hotel building had an elegant architectural design. It hosted 50 rooms, a classic iron cage lift, an exquisite upstairs buffet, ornate bathrooms and beautiful works of art, everything you would imagine in a classical and prestigious hotel, and nothing of the sort you’d imagine in the city today.

The hotel hosted many famous names during its time. This included Prime Minister Harold MacMillan, the Beatles in 1963, J.B Priestly and more. Yet somehow, this glorious venue would go into decline at the end of the 1960s. The reasons why are unclear, but it perhaps relates to the UK’s economic fortunes turning for the worse in the 1970s, the deterioration of Sunderland’s industrial base and the rise of international tourism which diminished the importance of Wearside as a destination.

Thus in 1971 the Sunderland Grand Hotel was closed. The council purchased the building for just £20,000 yet failed to do anything with it. As the site decayed and no effort was made to save it, in 1974 the building was ultimately demolished. This was of course the same council who demolished the old Sunderland town hall too, making the 1970s above all a terrible decade for the city’s development and future trajectory. The Grand Hotel now only lives in our memories as an icon of better days, a huge loss to the city