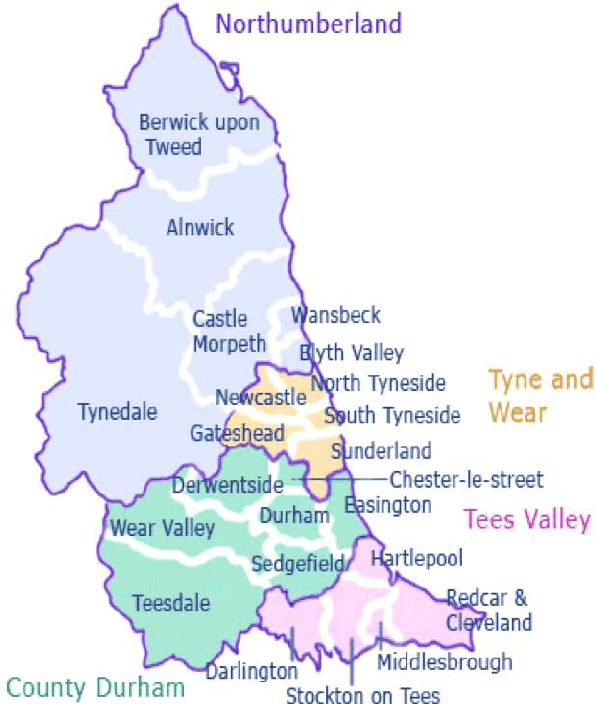 The North East is our home, and we’re proud of it. There’s no place of course like home, and neither is the anything quite like the down to earth, friendly and simple culture what we all share. We might have deep set rivalries such as Sunderland or Newcastle, but we know deep down we all have more in common than we have apart, with a common set of traits, worldviews and often backgrounds. We do enjoy it when we bump into each other abroad and feel the comfort of home.

But where is the North East exactly? We all know what it means and refers to, but it’s a simple geographic term to anyone else. It’s ambiguous, theoretically “anywhere” can be the “North East” there was even one TV show that recently referred to “Sheffield” as the North East, or politicians in London who refer to the “North” Leeds or Manchester. We understand what it means, yet the “North East” is otherwise vague, unoriginal and uninspiring. It doesn’t have the same power as names such as “Yorkshire” or “Cumbria”. We are more than just a geographical region, and are united by more than that, so we deserve more.

We propose referring to the North East of England, that is defined very specifically from the Tweed to the Tees, by it’s ancient name: Bernicia, an Anglo-Celtic kingdom which played a decisive role in the augmentation of England itself, later becoming the kingdom of Northumbria. Whilst of course there are certain political groups of late arguing for an “Independent Northumbria” encompassing the North as a whole, we reject this notion as impractical and unfeasible. Instead, we are advocating a rebranding of our region with the view of consolidating our relevance within Britain and strengthening our unique cultural identity.

By changing this name, we draw a special sense of continuity with our past and build a bigger comprehension of who we are. We no longer merely “Live in the North East” but we identify with “Bernicia” the longstanding ancient historical and cultural region which played a fundamental role in the defining of early English history. We attach ourselves to the Venerable Bede, to St. Aidan, to King Oswald, the Prince Bishops of Durham and all these important historical legacies and subsequently claim “ownership” over them as opposed to merely affiliation with them.

The North East of England on paper is a geographical region. It has boundaries, it has unique qualities, but otherwise serves little more than a dividing line on a map which tells us nothing about history, little more about heritage and nothing about who we actually are. But if we read it instead as “Bernicia”- it gains a background, it gains a heritage and tells us a story, and connects a seemingly long dead yet glorious past with a present whereby we have ultimately struggled to define who we are. A region defined not only the saxon era, but the industrial era too. Without Bernicia, there would be no “England” as we understand it to be.