The North Star: A Series Which Stares into the soul of Sunderland Life 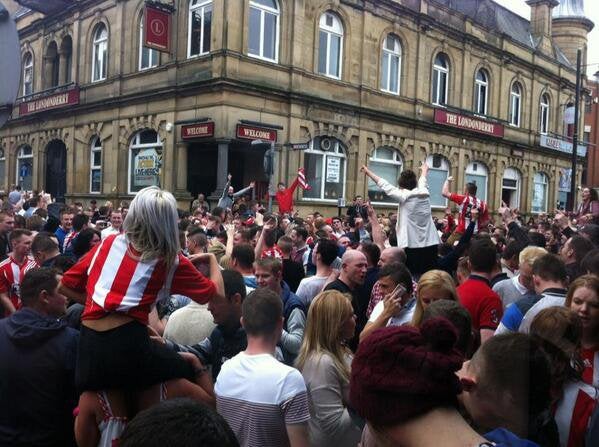 Photograph: Crowds outside of the former Londonderry pub in Sunderland, a typical city scene during football season.

If you haven’t read it of course yet, the North Star is a tale of how a girl from Thorney Close, Sophie Scott, living a downtrodden life with her negligent and alcoholic single father and working a job that she doesn’t like at the well known Dun Cow pub, finds herself heir to the mantle of an ancient hero known as the “North Star”- derived from medieval Northumbria and guided by the mysterious Viviane. She is given a legendary blade called Cargast, the spirit sword, and is tasked to counter the rise of a yet unknown ancient evil which appears to be transforming young men by some means into deranged monsters known as “Redcaps”- an obvious metaphor to longstanding anti-social behaviour and disorder in the city.

Sophie is joined on her quest by her best friend Millie Chen, a British-Chinese girl and her bar colleague Micky White, of whom depict differing attitudes and viewpoints in a city that has in decades of trauma struggled to come to terms with its identity and led to a proliferation of “angry politics”. This is a key backdrop of the story, with the pretentious right-wing Southern toff William Parker-Fulton running for election as Mayor (a hybrid parody of Trump and Boris Johnson) and vowing to “stand up for ordinary people”- a message which despite its obvious flaws proves to be popular, mirroring real world events. Some might prematurely dismiss the North Star as having a left wing bias, but it carefully navigates many controversial contemporary topics to offer two sides of an argument.

The main character’s journey is ultimately depicted by her struggle to discover her inner resolve in order to stand up for the people she loves and her area, despite a backdrop of tragedy, broken trust and hopelessness which frequently encourages people to stop caring. Therein lies the quality of the story, that it doesn’t present cardboard characters or perfect people, but pushes a rough and honest realism seeking to depict Sunderland’s charm, negativity, but nonetheless humility.

On this backdrop Sophie is shown to be a hero, but not a spotless one. Her situation is repeatedly referenced to be tied to her past mistakes, of which further fractured her relationship with her dad in the midst of the undisclosed death of her mother. Sophie is not a super genius like Tony Stark with the world at her fingertips, but a girl who failed at school and smoked questionable substances with chavs who struggles with the burden of responsibility, yet otherwise knows how to live up to it. Her forced devotion to others is matched by her often resentful and cynical nature.

Yet that is one core message of the series: redemption. The North Star is a metaphor of Sunderland’s struggles yet also displaying the inner hope that it can indeed rise again and shake off the shackles of negativity that have beset it and rekindle its own identity. The third installment “Big Trouble in Little Silksworth” will be out soon.