Dark Sunderland: Jane Atkinson, The “Washington Witch” Who Was Condemned to Death 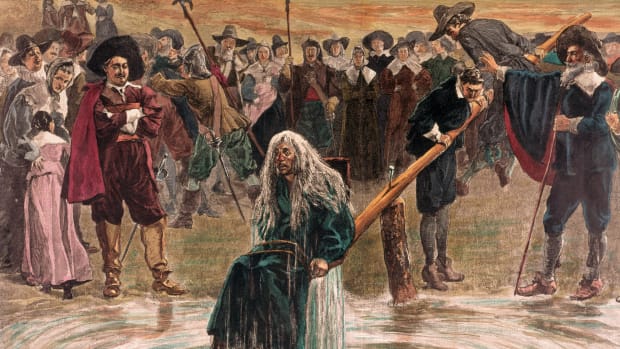 “She’s a witch, burn her!” is a quote from an infamous scene in Monty Python’s The Holy Grail in 1975. As funny of course as it may seem, the persecution of those deemed “witches” was a horrifying and deadly ordeal for the women it targeted, and whilst commonly associated with the Middle Ages, it was in the 16th and 17th centuries the magnitude of “witch hunts” surged in the English speaking world due to the influence of zealous, evangelical protestant Christianity. Today, the latest installment of our “Dark Sunderland” series covers someone from Wearside who was a victim of this mass hysteria, an elderly woman called Jane Atkinson who lived in the old village of Washington… as you can imagine, it didn’t end well.

The year was 1696. The period was a turning point in English history, sitting on the eve of the industrial and agricultural revolutions. Yet as noted above it was a time of fervent religious devotion and society had not yet changed. Washington was a small farming settlement in County Durham which since the Middle Ages had grew up around the old hall (as typical for many places in Sunderland) and had also started to discover coal mining. In this kind of community, it goes without saying that everyone knew each other and had limited knowledge or outlook to the outside world.

One day however, a disease outbreak occurred in the farming community which killed all of its cattle. Unable to understand what had happened, the Washington community whipped up mass hysteria and played the “witch” card, assuming the deaths had occurred by an act of dark magic. This quickly led to a Witch Hunt, and the elderly Jane Atkinson, an older woman who lived on her own, became the most “Logical” target. The villagers captured her and thus accused her of witchcraft, leading to one of the infamous “Witch Trials of that era”.

Jane was lucky to the extent that being burnt at the stake, a common practice at the beginning of her century, was banned. However, she would not be spared from the test of her “innocence” which involved sealing her in a sack and throwing her into a body of water to see if she would float or not. The logic behind this bizarre treatment was that if she floated, she was “guilty” because she could not be submerged in water as the evil of her magic meant she was rejected by god, and therefore could not be baptized. So on the other hand, if she sunk to the bottom it meant she was innocent…

So of course, Jane was tied into a sank and thrown into the Washington Pond (which is now the village War Memorial) and surely enough, she sank to the bottom. However, this didn’t acquit her from the mob. Unhappy, they did it not just twice but three times. To nobody’s surprise Jane sadly and predictably drowned anyway. The subsequent burial register is alleged to have placed “Witch” next to her name. She was buried in the Washington Churchyard, meaning she still remains in that cemetery today, even if the headstone itself has been since lost. Needless to say, what a horrible ordeal to experience.