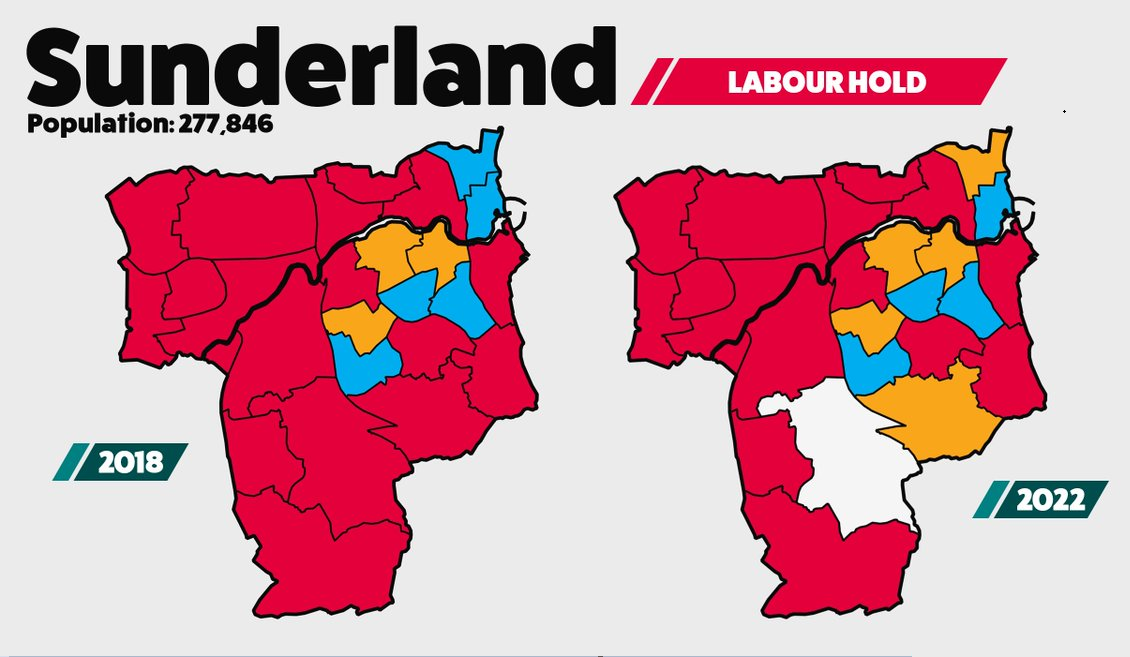 The Labour Party held on to control of Sunderland City Council on Thursday night despite hopes of reducing the authority to no overall control, with the Conservative opposition having missed an opportunity to gain ground due to the fallout of the “Partygate” scandal impacting their national polling. Despite this, the result overall was arguably a “mixed” picture than a decisive failure for any one party.

Benefitting from a swing from the Conservatives of about 4% based on the 2021 score (although being counted from 2018 scores) the governing party mounted a successful defense of the key battlegrounds they were seeking to hold, including in Ryhope, St. Annes and the critical ward of Washington South, the seat of leader Graeme Miller where the Tories had mounted a strong campaign to try and oust him, even receiving a visit from Prime Minister Boris Johnson. These results were all incredibly close calls, with Labour comfortable and secure in its “coalfield” heartlands of Shiney Row, Houghton, Hetton and Silksworth.

Despite this, nor were Labour able to make any inroads into Conservative held territory, with the Tories having held their key seats in the Barnes, St. Peter’s, St. Chads and St. Michaels. The Tories nonetheless expressed their disappointment over the results, blaming the situation on Partygate. Leader Antony Mullen quoted: “We’ve come close in a number of seats, and were it not for national picture – Partygate – I think we would have won them. I can only put it down to that. A lot of Conservative voters were staying at home.”

Labour will be relieved to hold on. However, the dark horses of the night were the Liberal Democrats who were able to seize seats from both parties, claiming a win from Labour in Doxford and a shock victory over the Conservatives in Fulwell, adding to a series of steady gains year upon year whilst successfully holding their existing seats. However, the biggest takeaway is that Labour have lived to see another day on Wearside, bailed out from what would have been a certain defeat if it were not for Boris’s unpopularity.

Note: The election in the Copt Hill ward did not go ahead following the unexpected passing of UKIP candidate Reg Coulson.

New Mural to be created for Millfield Metro Station, and an artist is wanted!

Sunderland Epic Story The North Star to be “rebooted” with enhanced concept, plot and characters