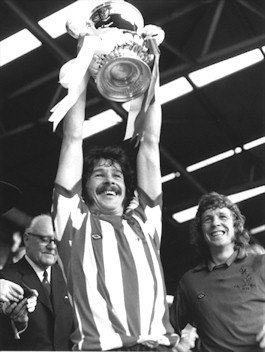 Born in the small town of Alexandria in Scotland, Kerr celebrated his 75th birthday on the 18th November this year.

He started his career with Sunderland and scored the winning goal against Manchester City on his debut back in 1964 in a 1-0 win.

Kerr captained the Black Cats to their second FA Cup victory in 1973 against Leeds United, where Sunderland won the game 1-0 thanks to a goal from Ian Porterfield.

He was nicknamed ‘The Little General’ by the Sunderland faithful, due to his tough style of play, despite being just 5ft 4.5 inches!

Making 427 appearances for the lads, over 12 years, he is respected by the fans for being one of the greatest servants of the club.

In 1978, he left the Black Cats and joined Blackpool, where he made 22 appearances before moving back to the North-east to finish his career at Hartlepool United.

Kerr retired in 1982, and since then he has ran several pubs across the North East.