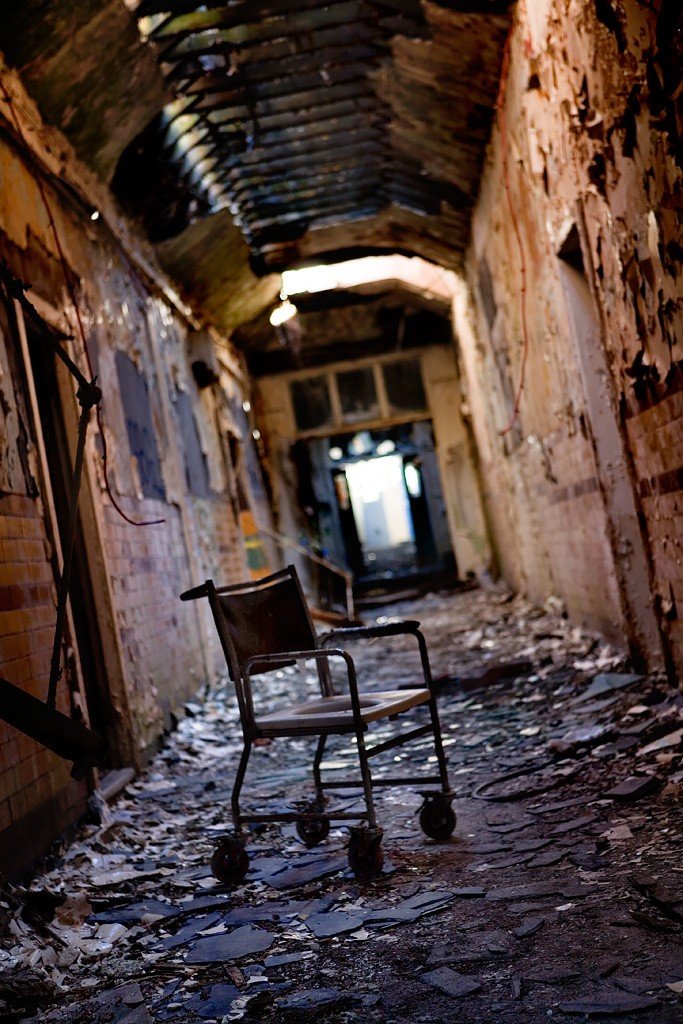 Unfortunately for the time being our “Legends of Sunderland” series has to experience a hiatus, primarily because we’re running out of characters to cover. So now, and especially in the months of the run up to Halloween, we decided we’d focus on something new. Our “Scary Sunderland” series will take a dark angle, diving deep into some of the city’s scariest, creepiest and most sinister phenomena. We’re going to talk about the scary locations of the city, its dark legends and ghost stories, as well the evil and terrifying figures through the years.

On our first stop, we’re covering one of the most notorious and creepy locations in Sunderland. It no longer exists, yet its creepy essence and memory still sends shivers down our spines. We bring to you, the dark history of Cherry Knowle Hospital, the most infamous and feared place ever to hang over the village of Ryhope, which sat abandoned for years as a magnet for paranormal seekers and ghost hunters until it was finally cleared away a few years ago. But apart from speculation of course, just why is Cherry Knowle so sinister? And besides being abandoned, was there any substance to the rumours of it being haunted? Let’s find out.

Cherry Knowle was a mental asylum constructed in the late 19th century, perched upon an iconic view of the North Sea, its location was chosen here because “They were specifically built in secluded areas just outside of towns as an effort to keep the mentally ill away”. The facility was designed in an interconnected triangular shape which was intended to lessen the need for staff to leave the premises, and make it harder for patients to escape outside, thus to create a “self-contained community”. It was also designed that light and air could circulate freely, in order to improve people’s mental health.

The Ryhope Aslyum, however, was born in a period whereby mental health challenges was not seen as something normal, or to be treat with empathy and care, but as something deranged and stigma to be treat in a harsh and draconian way. Attempts at reform of mental health management in the 19th century had not been successful as urbanisation and industrialisation rapidly changed the way we live, seen the population boom, and accelerated the number of patients. We may know it as Cherry Knowle now, a name it was granted in 1948 following the emergence of the NHS, but it was aptly described as “Sunderland Borough Lunatic Asylum” for its first 50 years or so.

In the Victorian era, it is little surprise that mental asylums resembled a custody of sorts, as opposed to an actual hospital we could envision today. As a history website states: “The function of mental institutions was simply to keep ‘inmates’ in custody. The keepers were little more than guards and it was not uncommon for patients to be kept in chains or other restraints for most of the time”. It was common place for attendants to use violence against “uncooperative” patients in order to restrain them. This, combined with the little oversight in that period, meant that mental health asylums became notoriously abusive, right throughout the 20th century even.

The horrors of being subject to a mental asylum were also manifest in some of the experimental treatments which arose from the 1930s onwards. In the 1930s, electroconvulsive therapy or “shock” was invented. In the 1940s, Walter Freeman developed the transorbital lobotomy, an “office” procedure which involved aiming to cut the frontal lobes of the brain in order to “cure” people, using an “ice pick” like device which took as little as 15 minutes to complete. All of these procedures were likely performed at Cherry Knowles for decades until the world of asylums was phased out by the UK government from the 1980s and 1990s.

It is no surprise that there are many rumours and stories of patients who suffered abuse of sorts whilst dwelling there, or that there are deaths of various people which remain “unexplained” or “unclear” to this day. Suicide of course, was a regular occurrence, as found here “One of our sources told us the tale of her grandfather who sadly hung himself during his stay at the hospital. This we are informed was not an isolated case” and it is no wonder that right up until the early 2000s, many families pursued enquiries against the NHS on precisely what happened to their loved ones whilst here.

A large independent inquiry in the early 2000s covered the deaths of up to 12 people, as well as seven out-patients. The hospital however became sharply criticized by the public for its perceived negligence, and the report was forced to conclude: “The system for monitoring and auditing the service was inadequate and the organisation had a false level of confidence in terms of how it perceived its own performance.”

Thus in the late 1990s, it is little wonder that alongside reforms in mental health care, Cherry Knowles closed its doors for the last time. The facility was demolished from 2014 onwards and now is being rebuilt as a housing estate, but it is no wonder given its terrifying legacy and the ordeals which went on there, that its memory inflicts a sense of discomfort, fear and uncertainty into those who imagine it. There of course has been never any serious sightings of ghosts, yet its ruins were creepy, desolate and stained with the memories of unease, human suffering and the aspects of mental health, we imagine depression, paranoia, hallucinations, despair, violence, unpredictably, all concentrated and stuffed into one place. Who isn’t scared by Cherry Knowles?

One thought on “Scary Sunderland: The Dark History of Cherry Knowle Hospital”