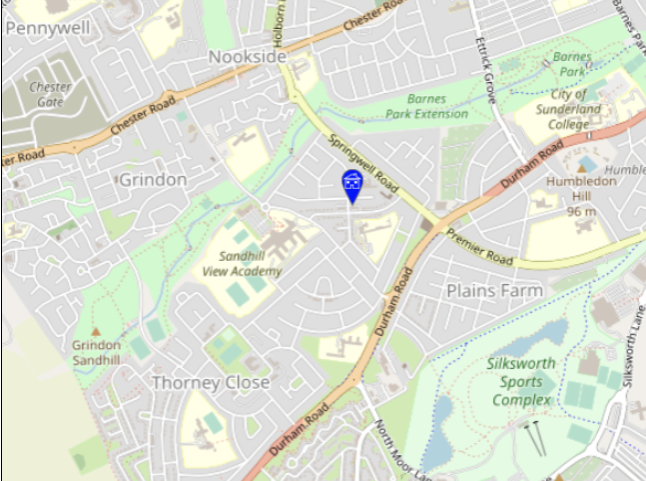 As we have set out through various articles many of Sunderland’s suburbs emerged in the Middle Ages as Manor estates or independent villages, giving them names usually over a thousand years old. We’ve talked about old Bishopwearmouth, how Farringdon was a Monastic Grange- “The Hill of Faer or his sons”, Grindon as “The Green Hill”, as well as the medieval settlements of Herrington, Southwick, Tunstall and Ryhope with their historic greens. But what if there were suburbs which never made it to the present day? With names and legacies that have been lost to history? That’s what we’re going to explore today, the story of the long lost “Hameldon Village” which occupied what is now contemporary Springwell (with no links to the present estate).

Although a bit further down the road in a different location, the name Hameldon should indeed sound familiar to you because it is in fact a historical derivation of what would later become known as “Humbledon Hill” because it was effectively named after the same landmass which the Durham road runs up and down. It is referring to the same area, but not the same settlement. The lost village of Hameldon was in fact based (as the map shows) on what is now Sunningdale Road, Springwell, south of Premier Road and near Grindon Lane, as well as next to the Barnes Park Extension. As we know in Old English, the name “Don” refers to a hill or valley, and Hameldon, later Humbledon meant “the well rounded Hill“.

Like other places in Bishopwearmouth, Hameldon was a village built around a manor estate. The first reference to this lost settlement can be found as early as the 1200s, beginning with Robert Ravensworth, son of “Richard of Ravensworth” surrendering his rights to the estate to his nephew Geoffrey. What did the village consist of? Bishop Hatfield’s survey of the holdings of Durham, probably the “go to” resource for existed in Medieval Sunderland and the North East reveals that Hameldon was in fact a significant settlement. It had 5 free tenants (these are the landowners, the elites), 15 holdings of demesne (a medieval farm division), 8 cottagers, 8 bondmen, a pounder, and posessed a windmill, a bakehouse and a metal forge (similar to Farringdon). The territory is described as encompassing some of the modern day Barnes and Pallion too.

So you’re probably wondering, what happened to this settlement? Why didn’t it evolve into a modern suburb in the way other places did? The answer is that one of the land owner, known as Jordan De Dalden died without a heir, which lead to his cousin Maud inheriting the lands, who in turn married into the historically powerful and wealthy family the Bowes (The Queen Mother’s ancestors) who came to own all of what is now “The Barnes” by the 15th century. At some point after this however, the estate was divided up, cutting “The Barnes” off from what was the core of “Hameldon” into a seperate location. The name of the Barnes itself was in fact derived from “The Barns of the Manor of Hameldon”- thus we should understand the Barnes evolving “out” of this settlement and then becoming something seperate.

What happened to the old village buildings and manor however is a mystery. Divided between new lands, the village of Hameldon and its community subsequently ceased to exist and its name disappeared from use in the 1600s, although it continued to be associated with the Hill itself. Then sometime after the 1930s, the modern estate we know as “Humbledon Hill”- a derivation of this historic name, was built. This concludes the story of Hamledon or “Hamlydon”- the lost suburb of Sunderland and the ancestor of the Barnes.