“The Rough Valley”: The Medieval History of Ryhope Village 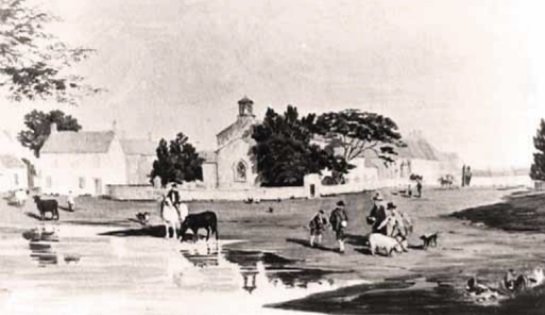 Ryhope is a village located to the Southeast of the City of Sunderland. Directly facing the North Sea, Ryhope is known for being a former colliery site, its rolling limestone cliffs and its rocky beach. Yet like most places on Wearside, it has a much longer and more intriguing history. Here as part of our broader coverage of Sunderland in the Middle Ages, we will dig deep into Ryhope’s past and go far beyond the age of coal, revealing a settlement which has a recorded history of least 1200 years and who’s heritage still reflects in its traditional village green.

Seemingly pre-dating Sunderland itself, Ryhope is a settlement which may have appeared at the earliest point of the Middle Ages. Its name is of Anglo-Saxon origin, and translates to “Rough Valley” compromised of “rýe” (rough) and “hope” referring to a valley. When translated to Latin, which is how early Church documents presented it, it was name as “Reofhoppas“. At some point in time, the early village came under the occupation of the Vikings, although no archaeological evidence of this has been found.

The Vikings were nonetheless expelled from Ryhope by 930, wherein King Athelstan established himself as king of all England. Eager to ensure the Scots would not attempt to annex the lands of Northumbria, Athlestan established his feudal order in the North East by delegating his lands to the Bishop of Durham, which as we’ve said a few times now created the new parish of Bishopwearmouth. Under this parish would come the township of Ryhope. Yet one small detail is that the Bishop’s records stated “Duas Reofhoppas“- connotating the idea that there was more than “One” Ryhope village, needless to say the other has been lost to history.

Fast forwards 200 years or so to the “Boldon Book”- The first survey of the holdings of the Bishop of Durham, and the North East’s equivalent to the Domesday book. Here we find the following information on medieval Ryhope: “In Ryhope and Burdon are 27 villans (peasants) , who hold , work , and render as those of Boldon“. These people were “servants for life” and received wages for working on the land. The original text of the book names it “Riefhope”. It also names two farmers in the village, simply called “Richard and William” who owe a certain amount in taxes to the Bishop. It is often told by legend that Ryhope beach was in fact the favourite bathing resort of the Bishops over the years.

In 1380, another important record of the lands of Durham was published in Latin in what is known as “Bishop Hatfield’s Survey” of the county. The survey describes Ryhope as having a population of 130 people, and that its land is owned by a “William de Hoton” granted lands through Foreign Service (presumably he was a knight). The area is also described as being “the seat house of John Carr” a building which later became a hotel by the 19th century.

As this rare medieval map of Ryhope shows, the settlement consisted of three rows of houses, and life of course was built around the green, which acted as a “common space” for various activities, with the population working on the various farmlands surrounding it. The actual shape of the settlement has not changed, even the roads going in and out of it. There was also a village pond which no longer exists. One can also see from the map that the main walkway onto Ryhope beach is also the same one as it is today. Ryhope would effectively sustain this structure over time, and it was only until Ryhope colliery was created in the mid 19th century wherein its surroundings would change.