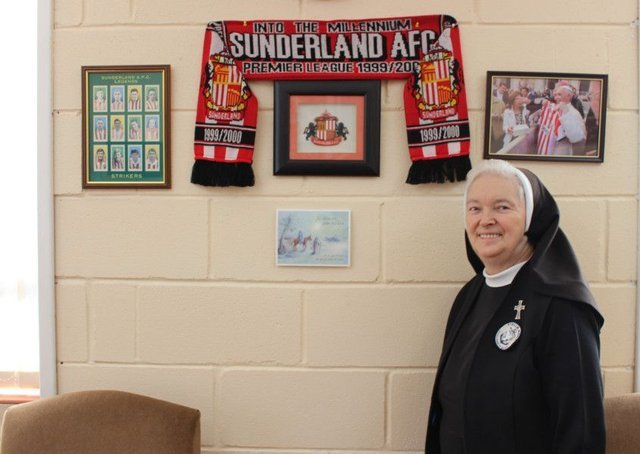 The latest installment of “Legends of Sunderland” brings us the tale of a local character who is known for her feisty and enthusiastic spirit, and is undoubtedly the most famous known Nun on Wearside. Her name? Sister “Mary Scholastica” a woman who’s active life defies her age, and who’s service is met with local acclaim and praise irrespective of one’s religious viewpoints. But who is she exactly? And what is she doing in Sunderland? Let’s find out!

A memorable scene from the hilarious Sitcom Father Ted sees the frequently drunken Father Jack Hackett discover that a group of Nuns are visiting the Craggy Island Parochial House. Entering the room in his wheelchair, he is horrified and promptly shouts to Mrs. Doyle “Reverse! Reverse!“- The elderly priest is known for his overt love of women, but not Nuns, and it is on that ironic note that Sunderland’s very own Sister Mary Scholastica is in fact of Irish origin. Thankfully, the comparison ends there and she’s nothing to be scared of.

Born and raised in Galway on the west side of the Republic of Ireland around 1940, Sister Mary took the decision to become a nun when she was just 17 years old and migrated to Sunderland to join the Sisters of Mercy Convent on Tunstall Road, affiliated with St. Anthony’s School. 63 years later, she’s been there ever since, yet it has been in her silver years where she has sprung into the public eye in the city with her respite and relief facility she volunteers down at the port of Sunderland. Known for her humorous personality, she has sometimes referred to herself as “the powerhouse of prayer” (sounds Dave the Raveish)

Eying up an ex-sea cadet facility in 2008, Mary teamed up with Catholic Charity the Apostleship of the Sea, as well as the City Council and transformed the old base into a drop in mission for sailors arriving at the port. It’s a place where they can relax, have a cup of tea, grab something to eat, contact home and learn about the area too. It even has its own collection of SAFC memorabilia. The facility isn’t exclusively for Catholics and nor does it have a particularly religious theme, although she does of course provide pastoral support for Catholic sailors, although she even arranges prayer for Muslims too. Mary has even worked with SAFC legends like Micky Horswill on donating football gear for sailors.

Sister Mary is undoubtedly a force for good in Sunderland, someone who is energetic, witty, compassionate and commands a lot of respect from authorities and organizations throughout the area. She is a character which makes a difference and reminds us that small and simple acts of consideration can in fact stretch a long way, regardless of what you actually believe in!