The Story Behind the Mysterious Pennywell Stone Hedgehog 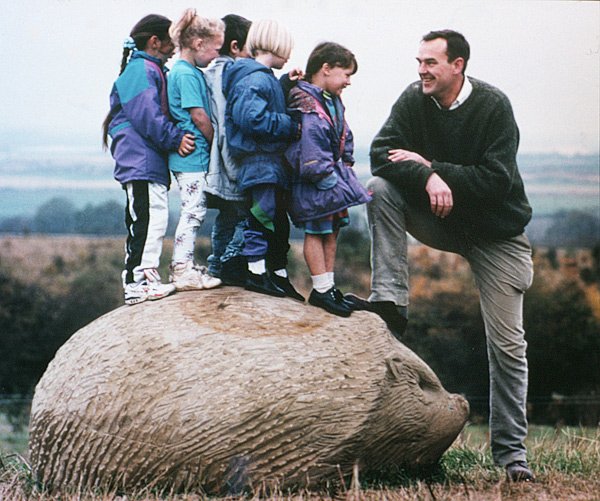 To the west of Pennywell tucked between the suburb and the A19 road lies a woodland known as “The Children’s Forest”. The area has gained its name because it was in fact planted by children in the early 1990s.

Unfortunately since that time, the area has became notorious for anti-social behaviour, fly tipping and littering. This has given it a dangerous reputation.

However, whilst on a community cleanup of the area which involved pulling weeds and tidying up the grass, William Tyrens discovered something unusual. From what appeared to be a large rock, was in fact a carved stone sculpture of a hedgehog.

The discovery provoked interest on social media. But where did this sculpture came from? And who made it? Well we have the answers now.

As a part of the children’s forest project, the sculpture was created by Hexham based artist David Edwick in 1993, who worked with a local school on it as one of his earliest projects.

Written on his own website, David states: “This was one of my earliest public art projects, working with quite young children at a local play school to devise a focal point for excursions and picnics in the freshly planted Childrens’ Forest at Pennywell, on the edge of Sunderland.

“We made clay models to decide on the subject and then did some carving in soft material to establish the form of the hedgehog.

The stone was bought as a quarry block and carved on site. Bikers made one or two attempts at vandalising it, but this is one tough hedgehog and they soon gave up.”

Yet in the near 30 years which have since passed, this marvellous work of art was almost lost the world. Not anymore. Here’s hoping this forest can become a “children’s forest” again and not a hive for louts and “sessions”.

One thought on “The Story Behind the Mysterious Pennywell Stone Hedgehog”