The History of Roker You Never Knew 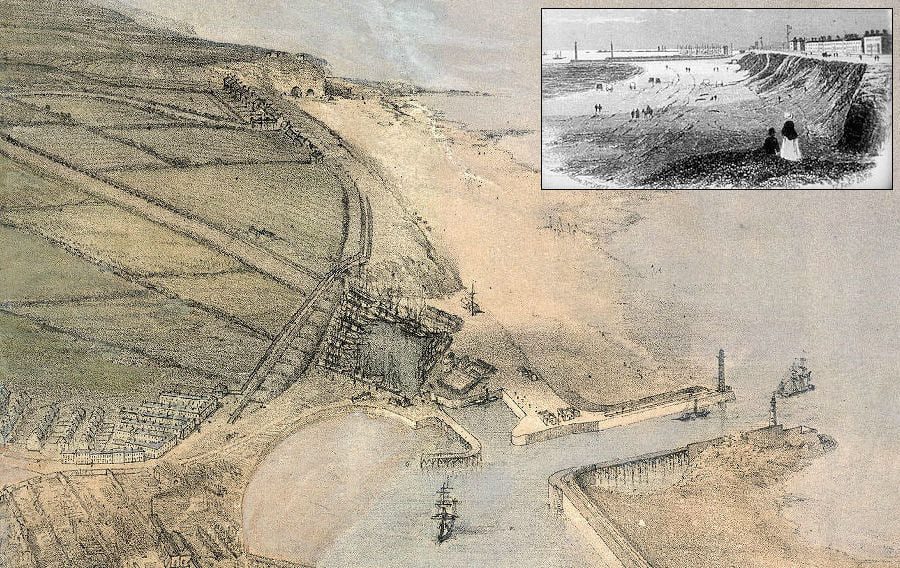 Roker is one of the most iconic locations in Sunderland, both contemporarily and historically. We know it for its fabulous seafront, park and beach, its mighty pier and of course for being the home of Sunderland A.F.C for 99 years. Few single suburbs herald such a legacy in our city. But where did it come from? What is the story of Roker? Where did it come from? And what we can discover about it? Here we dive into all of these questions in setting out the intriguing tale of our own seafront.

One thing that remains a mystery about Roker is the origin of its name. Whilst pretty much every suburb in Sunderland has a traceable origin and meaning behind its name, often stemming from the Middle Ages, Roker stands out with its name unknown. The name is absent from older maps of County Durham and the region, not appearing in 16th or 17th century accordingly, which frequently mention “Suddick” (Southwick), Fulwell and of course Monkwearmouth. This suggests the name “Roker” appeared in only the past 300 years.

That doesn’t mean of course nobody was there before that. What would become Roker was originally part, as above notes, of the Medieval village and parish of Monkwearmouth of which was founded with St. Peter’s Church in the 7th century. The sea was only five minutes away, but most of the surrounding land was used for agricultural purposes as opposed to building. Archaeology has also found the presence of the Romans on Roker beach, with coins having been found there in 1976. By the 16th century, a family known as the Abbs held the land.

The emergence of Roker as a suburb was directly proportional to the development of Sunderland itself. Prior to the 18th century, we have to remember that the area was geographically isolated from the town as there was not yet a bridge across the river, thus keeping its growing population from getting there conveniently. But the next 200 years would change everything as Sunderland began to develop from a small fishing village into a bustling port. First, as the passage of ships increased, a pier was needed North of the River. The “Old North Pier” would be built in 1717.

But a bigger development would follow. In 1796 the first Wearmouth Bridge would be built, a pioneer ironspan bridge that was the largest in the world at the time. The new structure would fuse the small parish of Monkwearmouth into the emerging boomtown of Sunderland from the East End, flooding it with new traffic, people and trade. The area would never be the same again, and of course the empty attractive cliffsides and beaches of Roker were an attractive pursuit.

By the start of the 19th century, another shift was underway. Sunderland’s growing and wealthy middle classes had originally spent their leisure time at Hendon Beach. In the early 1800s Hendon and its famous baths were glorious, but the expanse of the urban area and maritime traffic began to dim it. Then by the 1840s, the Port of Sunderland was carved out, drastically reducing the space of Hendon Beach and also making it an unattractive proposition. Tourism and leisure had to move somewhere else now, where would it go? Roker.

At the same time the port was built, the first houses were being built across the clifftops forming “Roker Terrance” and giving birth to the new beach resort which replaced Hendon. 40 years later this was accompanied with the opening of Roker Park (the park) the green space which the eastern part of the suburb grew soon around. In the 1860s, the new (current) pier was then built as Sunderland harbour taken its present shape, the current lighthouse however would not come until the early 20th century. The football ground was built in 1898.

In that same century, Monkwearmouth Colliery was built and opened in 1835, of which led to the accumulation of the terraced housing. A railway line existed which connected it to the “North Dock” space, where coal was directly transported into the port. This area is now known as the Sunderland Marina.