The Spirit of Sunderland: A Lost Dream of What Holmeside Could Have Looked Like 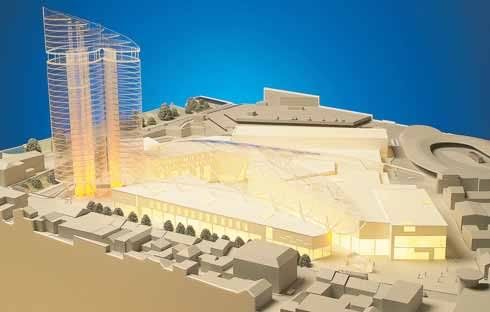 Holmeside is probably one of the least appealing areas of Sunderland city centre. A glorious past and an unfavourable pleasant, the area is a grim shadow of its former self. Yet it only 13 years ago did the opportunity to come and go to transform this seemingly downtrodden district into one of the most iconic areas in Northern England. We bring you “the Spirit of Sunderland” story, whereby a vision to build the region’s tallest building ended in abject failure, largely by misfortune.

Before Conservative austerity and the financial crisis kicked in, Sunderland City Council as part of the now defunct “Sunderland Arc” scheme harboured an £800 million vision to transform Holmeside and penned a deal with developer Thornfield Properties. Their plan proposed demolishing all the existing buildings within the Triangle space and constructing a brand new retail, office, resident and restaurant complex. The facility’s signature piece however would involve a 33 storey Skyscraper known as “The Spirit of Sunderland”- This tower was planned to be the tallest building in the North of England. Together, the plans would have radically transformed the City Centre beyond all comprehension and created 1700 jobs.

But it was not to be. First in circumstances beyond the city’s control, recession hit. The global financial crisis at the end of that year inevitably crushed property development firms, driving the chosen contractor Thornfield Properties out of business. With it, the entire deal was lost in 2009. The company who recovered its projects and investments chose to scrap the £800 million deal as it scrambled to balance the books. The council however, did not decide to pursue the project further or seek a new contractor. It was left in stasis.

Next, the Conservative Government of 2010 came. David Cameron’s moves further complicated the situation by axing regional development agency OneNorthEast and its subsidiary which worked with the council and had created these plans: Sunderland ARC. This sent the council’s local development plans into a tailspin and they would not recover from the blow until 2015.

But instead of making new plans or reinvigorating old ones, the council under Paul Watson (d. 2018) were seemingly desperate to prove they were “doing something” for the city. Then in 2014, they announced the creation of a new Sunderland College Skills Campus (shifting from Hylton) onto the prime land that was once set aside for a masterpiece development. This was essentially moving a college from one location to another, and then presenting as a win for Sunderland City Centre. A similar tactic is being pursued with the Vaux Site today, whereby the civic centre and eye infirmary are being “moved” to the area.

With the college development went the dream of a skyscraper and a brand new retail space. The Campus has been open for a few years now. Situated next to Park Lane, it provides next to no visible or material benefits for Sunderland City Centre whatsoever. As with many proposed projects. It is a sad indignation of what could have been. The collapse of Thornfield properties did not have to ensure the end of the development, but one must question why the council did not have the political will or ambitions to try and save it. Instead, many argue they seen value in securing the quick fix of a relocated college for the sake of doing something on a prime space of land, than pursuing the dream of the Holmeside Triangle which would have revolutionized Sunderland.

Thus we have to conclude:What next for Holmeside? What will drive this area forwards? Not least when many of its venues have been forced to close due to the impact of the pandemic?