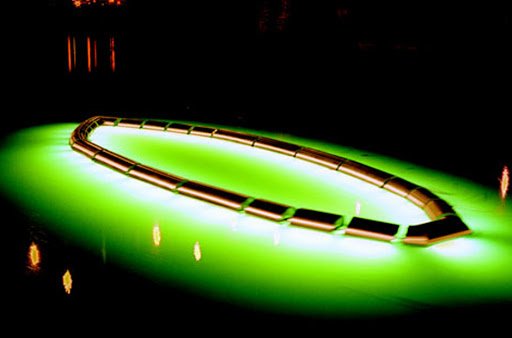 In 1999, Sunderland City Council put a £250,000 European Arts grant towards a 22 tonne steel model in the River Wear titled “The Ambit”. Designed by artist Alison Winding. Spanning 130 feet, the sculpture was designed to commemorate the area’s Shipbuilding heritage with an interior lighting system which created a Halo at night. It was hoped that it would become an iconic local attraction and decoration, especially as Newcastle began to streamroll ahead of Wearside at this point with the Quayside redevelopment.

The Ambit was launched on Septmber 29th of that year near the site of the former Austin Shipyard (to pay a homage to that legacy). However, it didn’t last long. Within the space of a month its lights started to fail and by February of the next year it had to be taken for tests and repairs after experiencing corrosion. But it didn’t give it any reprieve, the build up of silt from the fast flowing river quickly blocked its lights, only for its timer switch to fail and break it permanently. Waste carried by the river, including branches from Trees, also became tangled in it.

The sculpture’s bolts then broke apart through further corrosion destroying its shape, and it was then attacked by yobs who purposefully vandalized and damaged. By September, only one year after its launch, the Gambit was removed under the false Public Relations stunt that it was “going on tour” in other canals around Europe. This never happened.

By 2002, the Gambit subsequently disappeared forever. It was later revealed that the Steel from the model was privately scrapped and sold off by the council. In a nutshell, the Ambit was a disaster from start to finish, poorly planned, poorly designed and unsurprisingly unsuccessful.