These Are Sunderland’s Most Famous Foods, Have You Tried them? 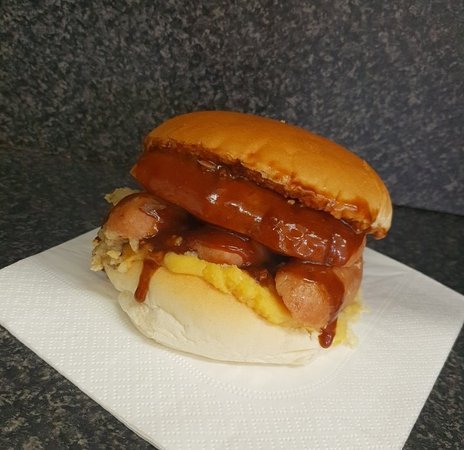 Food is not just about taste, but also iconography. We popularly imagine places around the world through the imagery of their most famous dishes and foods. There is no Italy without Pizza, no Japan without Sushi and no India without curry. This also applies on a local scale too, with cities and towns around the world all having their own iconic dishes and famous foods. So what of course but Sunderland, does it have it anything? If a visitor who had never been to the city before asked what the popular local cuisine is, what would you tell them? Here, we draw up some answers as to what we consider to be Sunderland’s “specialties”. We understand it might appear light hearted in tone, but local pride begins with local food.

As pictured above, the Saveloy Dip might be described as an authentic Sunderland creation, something created within the city. It is essentially a smoked sandwich, but with whole lot packed in there. It consists of several smoked sausages packed inside a gravy dipped bun with sage & onion stuffing and pease pudding (a mixture derived from split peas). Now this sounds a tad messy, but its local specialty and popularity speaks for itself!

A popular latecomer which emerged in Jackie White’s Market in 2019 as part of a local food and drink festival, the popular “Mackem Pie” is in fact of a Scottish inspiration, made with black pudding, reared pork and herbs. Still, this hasn’t stopped it from gaining the seal of a local brand. A Mackem pie typically costs about £1.40 if you fancy trying it.

What started as an insult by Newcastle United Fans was in fact embraced by Sunderland as its own. Yes, it is what the label says: Cheese on Chips inside a bun, with “buttie” being an English colloquialism for sandwich. In 2014 when Sunderland reached the Carabao Cup final, their fans sung “Cheesy chips on Wembley Way”, illustrating how the food made its way into local popular culture.

Now if you’re looking for something more “traditional” here it is. Although shared with the North East of England as a whole, Panackelty is a casserole stew of meat and vegetables which was traditionally eaten in mining communities, a nod to the area’s industrial heritage and former coalfields. However as a family orientated dish, you’re not likely to find it served in any restaurants or institutions. You’ll have to get it at someone’s home!

A Stottie Cake is another North Eastern traditional staple food. It isn’t as much a “cake” as it is a circular style of bread cooked in the bottom of an oven. This method of cooking differentiates it from normal bread by giving it a heavier and thicker texture, which enhances the taste. Given it is bread, Stottie normally comes alongside Panackelty or other dishes, or can be used as a sandwich in and of itself for meat and other things.

So if you’re ever planning to come and visit Sunderland, make sure you get some of these spectacular local dishes on your bucketlist! Which ones would you try?