Who are the Redcaps? The Monsters from Northumbrian Folkore Featuring in the North Star 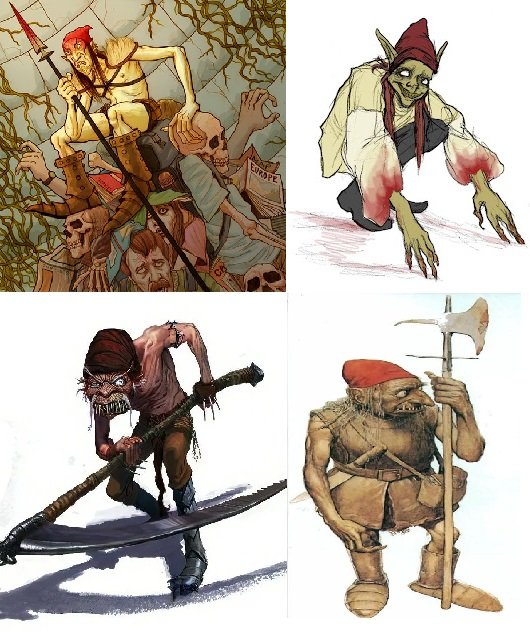 If you’ve been reading the North Star, you’ll be well aware that the series has frequently featured a set of monsters who are called “Redcaps“. Depicted as man-like monsters with a Goblin like appearance, the Redcaps are shown in the story as having a grey-green skin, yellow eyes and are unsurprisingly violent. We learn that they are in fact transformed from disillusioned and angry young men by a unique drug known as “Lava”- what is in fact a magical formula from the yet to appear Dark Wizard Glanfeoil, and distributed by the opportunistic drug baron Tony Radcliff and his “Southwick Green Boys”. Sophie Scott and her friends are frequently attacked by these creatures throughout the series, but she is able to destroy them using her powers.

It might be apparent to more obvious readers that the inspiration for the Redcap characters is a commentary on social delinquency in Sunderland which plagues young men, with anger, disillusionment and a lack of direction in life literally turning them into “monsters” in the metaphorical sense. But that isn’t all, the modern interpretation of these characters skilfully adds to a longstanding Northumbrian folklore of legendary malevolent creatures of the same name who live around the Anglo-Scottish Border. The Redcap is already an established local legend, we just never knew about it.

The Redcap is in local folkore, a goblin or monster of sorts. His appearance is very similar to that depicted in the series, often described as a “short, thickset old man with long prominent teeth, skinny fingers armed with talons like eagles, large eyes of a fiery red colour, grisly hair streaming down his shoulders, iron boots, a pikestaff in his left hand, and a red cap on his head”- the red colour being derived from the soaked blood of his victims. They are said to dwell in abandoned castles. Some stories depict them as spirits than physical monsters, which like to haunt old Scottish towers accordingly.

The creature also features in the Harry Potter Universe too, being is referenced in the third film, but is only a subject of lore or discussion than a physical character, which is inevitable given Rowling actively incorporates mythological creatures into her work. However, it is fair to say that the North Star has created a wholly unique twist on these figures in depicting them as a representation of chavs, yobs and “lost souls” of post-industrial northern England. The Redcaps are Northern England’s very own fairytale monsters, but here we’re seeing them as a reflection of our own society.